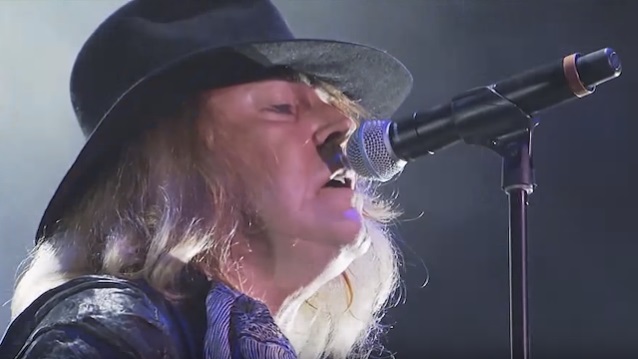 Don Dokken has confirmed that DOKKEN has received an offer to play with former guitarist George Lynch at a concert in September.

DOKKEN's classic lineup reunited for a short Japanese tour in the fall of 2016. The trek marked the first time in 21 years the four musicians had hit the road together.

Since completing the reunion dates, DOKKEN has continued to perform with the group's current lineup — featuring Don, drummer Mick Brown, guitarist Jon Levin and bassist Chris McCarvill — save for a handful of shows in late 2017 that saw guitarist Ira Black (LIZZY BORDEN, VICIOUS RUMORS) fill in for Levin. The group has scattered tour dates scheduled through the summer, including a performance at this year's Wacken Open Air festival.

Asked by SiriusXM's Eddie Trunk about George's recent claim that there was "talk" about the classic lineup of DOKKEN playing "at least one big show" next year, Don said: "We have an offer on the table coming up in September. Mick and I talked about it yesterday; we haven't made up our mind yet, 'cause we have to think about it."

He continued: "I have to protect the franchise — of the [current band, featuring] Mick Brown, Don Dokken, Jon Levin, [our guitarist of] over 20 years, [and] Chris McCarvill [who has] been in the band a long time. I have to protect the franchise, and [George's] got LYNCH MOB. But, you know when these, we call 'em, 'honeypot' shows come up, and they say, 'Would you mind if George played, and we'll give you a crazy amount of money?'…

"We did the Japanese tour, but we now have maybe a gig coming up on September 7 in Minneapolis at a big casino festival — a huge festival — and I haven't talked to Jon about it yet," Don added. "But I have to keep my respect for Jon Levin; I don't wanna step on Jon Levin's toes, 'cause he's my brother, and he's one of my best friends.

"So they made an offer," he said. "And I said, 'I'll play with George. We don't mind playing with George. But it's gonna have to be George and Jon [playing together at the same time].' … We're DOKKEN," referring to the lineup featuring Don, Mick, Jon and Chris. "He can come on our stage. It'll be an Internet, Facebook, YouTube sensation, video-wise, 'cause he's gonna do six to eight songs. And if you're listening, George, I'm not bagging on you, but he'd have to remember them."

The official video for "It's Just Another Day" — the first DOKKEN track featuring the group's classic lineup since 1997's "Shadowlife" — can be seen below. The clip was filmed in January with director Jamie Brown, who has previously worked with LYNCH MOB and KXM.

"It's Just Another Day" is featured on "Return To The East Live 2016", which was released in April 20 via Frontiers Music Srl. In addition to the October 2016 performance at the Loud Park festival in Japan, this set included footage from the classic lineup's only U.S. show in September 2016 at Badlands in Sioux Falls, South Dakota, as well as newly recorded acoustic reworkings of "Heaven Sent" and "Will The Sun Rise".