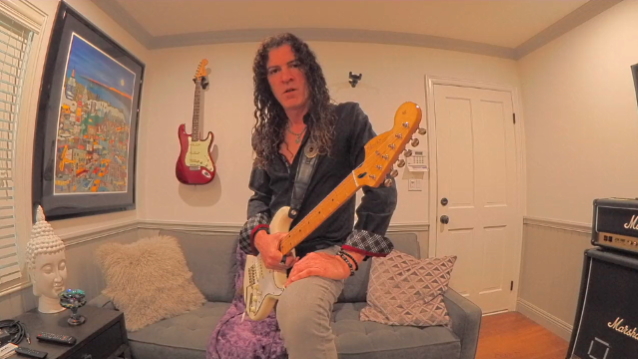 Music journalist Thomas Amoriello Jr of Boston Rock Radio recently conducted an interview with DOKKEN guitarist Jon Levin. Asked about his approach to the DOKKEN songwriting process, Levin said: "I usually like to write by starting with a riff that I like, and I'll build off that, and I record it on my iPhone and then I play them for Don [Dokken] and see what he likes. When he likes something, I'll start building it, working on a verse and chorus with handle, rebuild it into a song.

"We're ready now for this new record," he continued. "Because of the COVID-19 thing, we're doing things a bit differently. I'm actually just taking the riffs that I've written on my own and putting down a verse and a B section and sending that to him all at once so he can get a better picture, and he is sending me more completed items. Because the current state of the world is so chaotic, it warrants everything being different. It's still going to be great. I'm really excited about this new record."

Asked what has been his proudest moment to date related to his role as lead guitarist in DOKKEN, Jon said: "Well, I'm very proud of all those recordings we did. Certainly, I love the 'Lightning Strikes Again' record [2008], and I think the 'Broken Bones' record [2012] was my favorite. I spent a lot of time on the solos on that record.

"In the past, up to that point, I would usually just take one or two passes and pick the one I would like best, and then just do some 'punching in' from there. But on the 'Broken Bones' album, I set it up so that I could just record over and over on a track as much as I wanted to, and I would do that over the course of weeks, and then I would go back and edit it. It was really interesting to see how different my approaches would be on a day-to-day basis. I [would go] through a whole set of them on one day, then two weeks later, without listening to what [I did before], I would do a whole bunch more. Then I was able to pick what I felt was the best vibe for that particular song. So that really worked well. So I really think that 'Broken Bones' was my proudest moment in terms of the guitar soloing."

Levin was a member of WARLOCK before he joined DOKKEN in 2003.

For most of the last couple of decades, Levin has been DOKKEN's attorney, helping them in record label negotiations and court matters.

DOKKEN's new studio album will be released via Silver Lining Music, the label owned by Thomas Jensen, one of the founders of Germany's Wacken Open Air festival. It will mark the group's first disc since "Broken Bones".

DOKKEN's classic lineup — Don, guitarist George Lynch, basist Jeff Pilson and drummer "Wild" Mick Brown — reunited for a short Japanese tour in the fall of 2016. The trek marked the first time in 21 years the four musicians had hit the road together.

Since completing the Japanese reunion dates, DOKKEN has continued to perform with the group's current lineup — including Levin, bassist Chris McCarvill and drummer BJ Zampa (HOUSE OF LORDS).