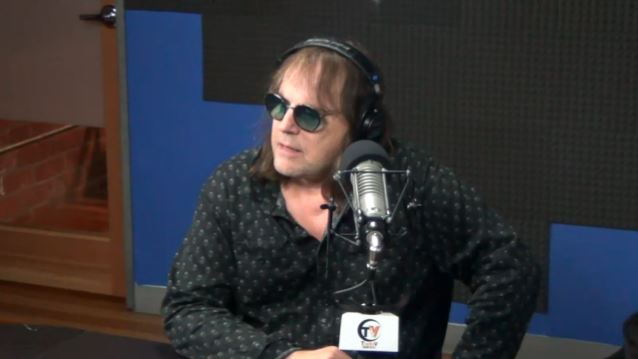 DON DOKKEN: We Got Paid 'Crazy Amount Of Money' To Star In Chicken Commercial

Don Dokken was interviewed on the latest episode of the "Inside Metal" show with host Bob Nalbandian. You can now watch the program below.

Speaking about DOKKEN's appearance in a commercial for Norton Internet Security 2010, the virus, spyware and Internet protection software from Symantec, Don said: "That place where it was filmed is the largest wooden structure in the United States that was built in World War II to hold four blimps. Because people believed that the Japanese were gonna invade L.A., and so they had blimps in there all the time, blimps looking for planes coming to Long Beach, 'cause that's where we made all the ships. So they built this huge structure. That structure has been used on Nissan commercials, movie sets… It's a ginormous… And I thought, 'Why are we in here?' Because it's just us standing there and just a camera ten feet back. And I thought, 'Do we really need this gazillion-foot hanger?' But the director wanted this kind of incredibly over-the-top depth of field thing. And it was a friend of mine, Ryan [Ebner]. He was actually staying in my Beverly Hills house, and I had a guest house. And he says, 'I'm doing this commercial and one of my bands pulled out. Do you wanna do a commercial?' I said, 'Yeah, I'll do a commercial.' He's, like, 'It'll be you and the chicken.' And I went, 'No no no no no no. I'm not doing the…' That commercial… There was this band DANGER KITTY and they [did a commercial for Discover card where they] end up in a bar mitzvah. I said, 'I'm not gonna punk myself.' But they got paid great money. And then he told me how much he'd pay me. And I went, 'Really?' He goes, 'Dude, it's Norton Antivirus.' I said, 'For that kind of money, I'll wear a chicken suit. I will be the chicken. I will flap my wings and I will cluck for the…'"

He continued: "It was a really crazy amount of money they paid us. We did four versions [of the commercial]. But the money we made was great, and it was supposed to be on television, and they decided not to, and it went to YouTube and got, like… It's up to three million hits or something like that."

DOKKEN's eleventh studio album, "Broken Bones", sold around 2,600 copies in the United States in its first week of release to land at position No. 173 on The Billboard 200 chart. Released in North America on September 25, 2012 via Frontiers Records, the effort was made available in two configurations: standard CD and limited-edition CD in digipak with a bonus DVD, which features a comprehensive "Making Of The Album" documentary.