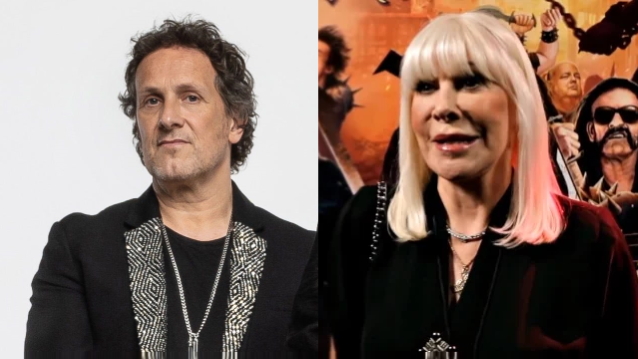 Vinny Appice says that he doesn't think there will ever be a reconciliation between Vivian Campbell and Wendy Dio.

Campbell, Appice, singer Ronnie James Dio and bassist Jimmy Bain collaborated on the first three DIO albums — 1983's "Holy Diver", 1984's "The Last In Line" and 1985's "Sacred Heart" — before Irishman Campbell left to join WHITESNAKE in 1987. Vivian later publicly took issue with Ronnie's need for total control of the band, claiming that finances played a major part in the bad blood that preceded his exit. Specifically, Campbell said that "it had become increasingly clear" to him that "Wendy (as Ronnie's manager) was determined to separate Ronnie from the band. She didn't see DIO as one creative unit. Ronnie knew better, but I suspect that in an effort to win back Wendy's love" after the couple split, "he was willing to bend to her whims. Thus began the beginning of the end for the original DIO band."

Asked in a new interview with SiriusXM's "Trunk Nation" if he thinks there can ever be a mending of the fences between Vivian and Wendy, Appice — who has played with Campbell in LAST IN LINE for the past eight years — said: "I think it's probably too much water under the bridge for that. That's a question for Viv. For a long time, Viv didn't wanna really play DIO songs or anything. It was just there. And now he accepted the fact that this is part of his history. He came into this and he became a guitar player in this band and he blew everybody away and it is part of his history. So I think [the formation of LAST IN LINE] was a big step — probably the big and final step you're gonna get. [Laughs] There's still some other problems [between Vivian and Dio] — business problems — sitting there that are not worked out. So I think this is as close as it ever will get."

The drummer added: "I think [a reconciliation] would have happened maybe if Ronnie was alive. Because musically, it was between Viv and Ronnie. [But then] Ronnie fired Viv because of business — there was business issues. And the businesses were bound to Wendy… And Viv was right in what happened and what he believed in. Because, in a nutshell, we were promised the moon, and it didn't happen. So that's basically what happened, and that leaves a bitter taste in your mouth."

Last year, Vivian told Guitar World magazine that he had a "very different perspective" on his relationship with Ronnie now that it has been almost a decade since the legendary singer's passing. "I must admit it's irksome that all these years later, people still think I left the band," he said. "I never wanted to leave DIO. I was fired during the middle of the tour. It left a bad taste in my mouth and turned me away from the music. Then in later years, Ronnie and I made the mistake of airing our dirty laundry. We should've never allowed things to get to that point. It was only after my stint with THIN LIZZY that my passion to play angry, aggressive rock guitar was reignited. Ronnie's passing allowed me to look at things differently and reassess. That was the whole reason I started LAST IN LINE. I got into playing that stuff again and thought, 'Fuck, not only was this great fun to play but I helped create it.' It's my heritage as much as it was Ronnie, Jimmy and Vinny's. For many years, I allowed myself to believe it wasn't, because I kept it at arm's length. Now I embrace it."