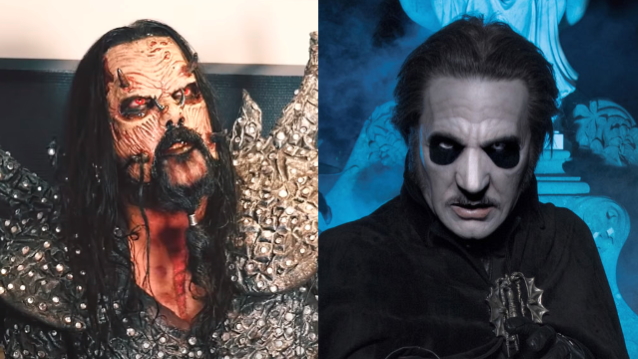 In a recent interview with France's Duke TV, LORDI frontman Mr. Lordi was asked for his opinion of another masked metal band, Sweden's GHOST. He responded (see video below): "There's a lot of GHOST fans, even in our crew, and I fucking dig the whole image and the whole thing, but I just don't get the music for some reason. I mean, some of the songs — like that… What is it? It's a slow… It's like a ballad thing. 'He Is' — that's a great song. But then I heard some other… It's kind of hard for me to find the 'beef' in all the songs. I love the image a lot, of course."

LORDI's latest album, "Killection", came out in January via AFM Records. The effort was described in a press release as "a compilation album that simply says 'what if' LORDI had been in existence since the early 1970s. It contains all LORDI's imaginary hit singles from different periods done with painstaking attention to detail using authentic studios and vintage technology."

LORDI won the Eurovision Song Contest in 2006 with the song "Hard Rock Hallelujah" and remains the first and only winner from Finland in the history of the competition. Since then, the band has gone through several lineup changes. Mr. Lordi is the only remaining original member of LORDI, though guitarist Amen has been with the band since 1996.