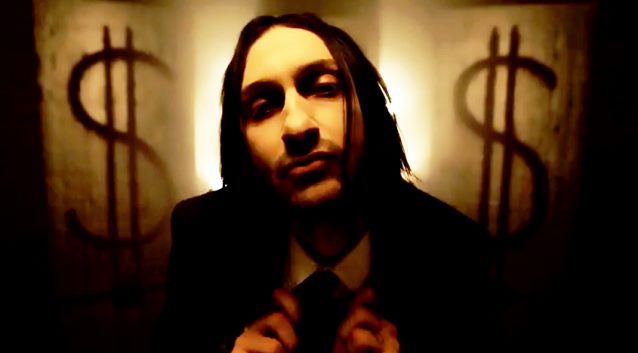 Speaking publicly for the first time in four years, founder and frontman Edsel Dope weighs in what fans can expect: "It sounds like DOPE. But it's next level. It's DOPE in 2014. With every record, the chemistry changes, the band changes and the sound expands. I'm really happy with how it's turning out. It's heavy, it's pointed, it's punk, pissed off, angry, electronic, noisy, melodic and metal. It picks up where 'No Regrets' left off and yet somehow has a lot of the punk/industrial energy of the early 'Felons And Revolutionaries' stuff. It's DOPE. And like all DOPE, it's best when played extremely loud and while traveling at dangerously high speeds."

DOPE is returning after a four-year hiatus that concluded after touring alongside BLACK LABEL SOCIETY and SEVENDUST following the release of the band's fifth album, "No Regrets".

"Truth is, after 13 years of non-stop recording and touring with DOPE, I was burnt and I just needed a break from it all," says Edsel.

He continues, "I'm ready to go now! I’m excited to get out there and re-connect with the fans and with that energy and feeling of being on tour.

"We are gonna do a month worth of shows and lose our fuckin' minds before I slide back into the studio and put the finishing touches on the new album."

During the short break, DOPE's fourth LP, "American Apathy", eclipsed one hundred thousand units sold in the U.S. Edsel continues, "Selling a hundred thousand records now days is incredibly respectable. It's awesome to know that our albums keep moving month after month on iTunes and in what few record stores still exist on planet earth. It's pretty fuckin' cool to gradually reach these milestones. It is extremely gratifying."

DOPE will hit the road next week for a month's worth of club dates before heading over to Russia at the end of October. Edsel adds, "My DOPE batteries are recharged and I am psyched to be back to it full time. The energy of the new music is off the chain! I can't wait to finish it all up and be out there and tour the world." SOIL will be joining DOPE on this the month worth of shows.

During the time away, Edsel has assembled the latest lineup.

"With every DOPE album, the lineup shakes up a bit," says Edsel. "People grow, visions change and opportunities arise. It's just part of the process and it has always shaken out to be this way. Everyone has there own passions and we all support each other. DOPE has become like a fraternity and I am on great terms with all of the guys who have ever played with me."

Edsel has reunited with former touring DOPE drummer and MUSHROOMHEAD percussionist Dan "Dubs" Fox while adding new guitarist Nikk Dibs and bassist Jerms Genske, former lead vocalist of DIRGE WITHIN. Longtime DOPE guitarist Virus, who is also a member of DEVICE with David Draiman of DISTURBED, recently performed a handful of shows with DOPE in August and will be joining the band for dates in Russia at the end of October.

"I love playing with Virus. He's my boy! I'm proud of him! He’s kicking ass with DEVICE. He kicks ass at whatever he does and we will kick ass together again in the near future," concludes Edsel.

Original bassist Acey Slade recently returned to DOPE for a handful of Midwestern shows and will also be performing in Russia with Edsel, Virus, and Dubs at the end of October.