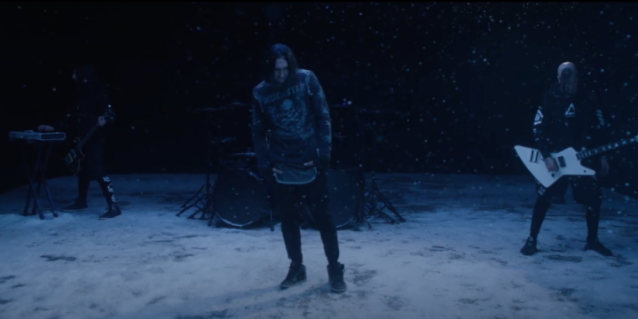 Coming on the heels of the announcement of their seventh studio album "Blood Money Part Zer0" being released on February 24, 2023, New York City electro metal pioneers DOPE have unveiled their first music video for the track "Believe" (featuring Drama Club). The clip, which was directed by Edsel Dope and Matt Zane, stars Fivel Stewart, who is best known for her work in the acclaimed series "Atypical" and recently in the Sam Raimi-produced, Sandra Oh-starring horror film "Umma". The video co-stars Johnnie Guilbert, a solo acoustic artist who has amassed over a million followers on multiple platforms.

The "Believe" video follows Fivel and Johnnie on a psychedelic journey into the desert and beyond, while the band powers through their performance during a snowstorm. The energy of the song is very dark, but ultimately, it resolves to help the listener to find peace. Edsel delivers the lyrics of: "We live and learn, die and burn, so in the end. I believe in love, cause that's where it all begins."

The song "Believe" was originally a demo from Edsel's previously anonymous side project titled DRAMA CLUB, which exploded on to the scene in 2014. DRAMA CLUB toured the world with BLACK VEIL BRIDES, FALLING IN REVERSE and also appeared on the entire Warped Tour of 2015. The video for the track also features some of the final creative efforts of Amie Harwick a.k.a. Amie Nichole, who worked as both choreographer and a dancer in the video. Amie was a long-time friend of the band and tragically passed away after the filming commenced.

In a move to demonstrate the bands sincere appreciation to their loyal fanbase for more than two decades, DOPE is giving away "Blood Money Part Zer0" for free digitally. Longtime fans, curious listeners and people that enjoy gratis music can sign up to download the album for free on the band's web site. A physical pre-order will also be available on the band's web site for fans that want to purchase the new album in various physical formats.

DOPE recently released an introspective infomercial which doubles as a behind-the-scenes look into the real life of Edsel, his private life, and his many ventures outside of DOPE. A very private person, virtually inactive on social media, Edsel is intentionally secretive about what he does with his time between records and tours. This video serves as a direct message to the fans, inviting them to see behind the curtain of the mysterious man, whose creativity they have supported for years. In the end, the video is ultimately an introduction to "Blood Money Part Zer0" and will feature teaser clips from the music videos for "Believe" and "No Respect", but is also so much more.

DOPE will hit the road in 2023 in support of "Blood Money Part Zer0" as part of the "Rise Of The Machine" tour with STATIC-X and FEAR FACTORY. The 42-date trek kicks off February 25, 2023 in San Francisco, California and wraps up April 15, 2023 in Los Angeles, California.