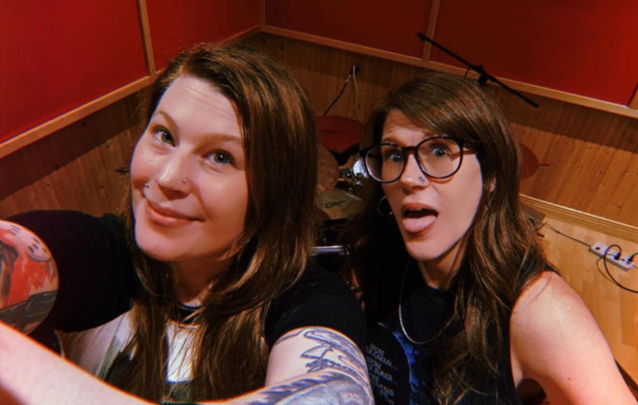 During an appearance on the latest episode of "The MetalSucks Podcast", guitarist/vocalist Morgan Lander of reactivated Canadian metallers KITTIE spoke about the possibility of following up the band's upcoming shows with some new music. She said (as transcribed by BLABBERMOUTH.NET): "I have a whole phone full of riffs that I'm, like, 'I think I could probably use these.' And preparing for these shows has obviously opened up that door a little more and sort of motivated me to do that stuff — be more creative and write. But I don't have a deadline."

She continued: "I feel like it's tough to focus on getting back up to speed with the tour and then also write at the same time. Everybody's navigating their jobs and family stuff and all that, so that's always tough. So I feel like it's kind of like one focus at a time. But we definitely won't stop playing shows. I think we'll be really choosy about doing some festivals and things like that. But I do have maybe kind of a skeleton timeline I'd like to have some of these ideas put forth by. I think new music in 2024 would be really cool."

Morgan added: "I know I've said this a few times, and maybe if I continue to put it out into the ether it'll actually happen, but the idea of maybe re-recording the first album for, like, the 25th anniversary — something like that — T-Swifting it up, it's kind of a really interesting idea. And I think with the musicianship now and how we all kind of sound and jell, I think it could be a really interesting exercise. That's something I thought about as well."

Morgan and her sister Mercedes, who plays drums in KITTIE, held their first rehearsal together since 2017 in April. A month earlier, Morgan confirmed to Anne Erickson of Audio Ink Radio that KITTIE will play more shows beyond the already announced appearances at the Blue Ridge Rock Festival in September and at the When We Were Young festival in October. "That's it for this year," Morgan said. "But next year, we definitely will. But I think those opportunities will come later on.

Joining Morgan, Mercedes and Ivy at the above-mentioned shows in the fall will be guitarist Tara McLeod.

Asked in an interview with the "Talk Toomey" podcast what led to Vujic returning to KITTIE for the upcoming dates, Morgan said: "Ivy played on two of our albums, the last two albums that we did. She left the band right before the very last big tour that we ended up doing; she did the Soundwave Festival [in Australia] with us in 2012, and those were the last shows that we did with her. And she just kind of settled into her life, started a family, got married, and so that's sort of been what she's been up to. But Ivy's a metal girl at heart and she's always been super, super easygoing about stuff. I just sent her a message and I was, like, 'Hey, can we talk?' And we had a really, really great phone call and I just sort of explained the situation, explained what was going on. I asked her if she'd be into doing it, and she was, like, 'Yeah. Sounds great.' … It's very much one of those things where you don't talk that often anymore, you don't see each other that often, but then, when you all get together again, that chemistry and that vibe is always there."