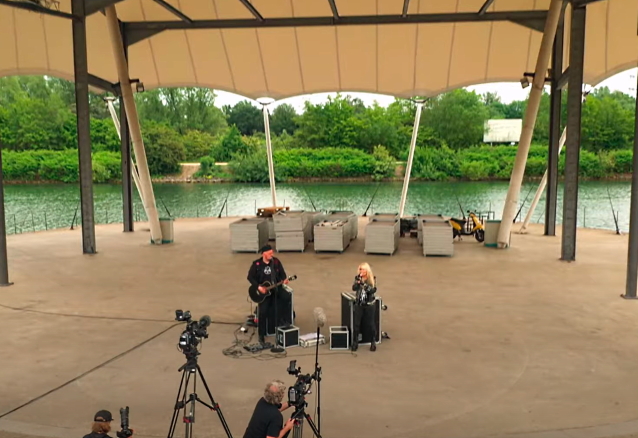 German metal queen Doro Pesch performed at the empty Amphitheater in Gelsenkirchen, Germany as part of WDR "Rockpalast"'s "Corona Sessions". Video of the four-song set — consisting of "I Rule The Ruins", "Für Immer", "All We Are" and "A Thousand Years" — can be seen below.

Doro stated: "Such a great place. Last time I played there it was packed with more than 7000 people. It felt totally surreal to perform there without an audience. I hope so much for live shows to come back soon, and to be safe.

"Thanks a lot to Klaus Vanscheidt for joining me on guitar, to Thomas von der Heiden Musikfotografie for the nice pix, and of course to the great Rockpalast team and Amphitheater crew!"

As previously reported, Doro will perform at least two drive-in concerts in Germany next month while complying with the country's social distancing regulations. The first one will take place on June 13 at the CARantena-Arena in Worms, while the second one will be held on June 28 at Bottrop’s Autokino am Moviepark.

The first Live Nation show was held earlier in the month in Denmark, with 600 cars in attendance.