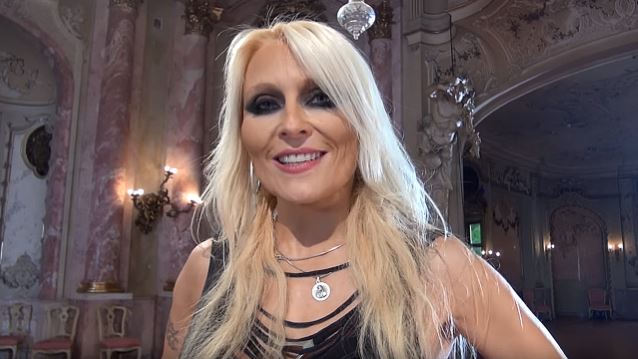 DORO PESCH On The Demise Of WARLOCK: 'I Never Wanted To Have A Solo Career'

Chris Akin of "The Classic Metal Show" recently conducted an interview with German metal queen Doro Pesch. You can listen to the full chat below. A few excerpts follow (transcribed by BLABBERMOUTH.NET).

On how she feels about WARLOCK's "Triumph And Agony" album, which is celebrating its thirtieth anniversary this year:

Doro: "I totally feel as strong as I felt in '87. It's a dream to play all these songs [to celebrate the album's anniversary]. Actually, we've never played all the songs in our setlist. Some of them, they are so nice, like melody-wise, word-wise. It was definitely one of our best records. I still feel as excited and it brings back great memories, for example, great people played on the record, like the legendary Cozy Powell [drums, ex-BLACK SABBATH, RAINBOW]. He played on 'Touch Of Evil'. Every time I hear our drummer doing the intro, then I think of Cozy and my best friend Tommy Bolan who, was the guitar player at the time. We are playing together again. When he plays all the great solos, it's like 'Wow!' It's a dream. I'm super-excited about it. I think, live, it sounds even better, even wilder."

On whether she knew WARLOCK's breakout hit "All We Are" was going to be successful while she was recording it:

Doro: "'All We Are', I tell you, the first time I felt it could be something is when we put all the metalheads, all of our friends and when we had these people coming into the studio, we just asked them [as] they were walking down the street and said, 'Hey, can you guys come in and sing a little background vocals in the studio?' They went, 'What?' There were about fifty people singing the [chorus] to 'All We Are'. That was the first time I thought, 'Wow!' Everybody seemed so happy and excited. I saw the look in their faces and in their eyes that it was really so much fun to sing this great message of 'All we are. All we are we are. We are all, all we need.' It's a united feeling. It's a way of feeling friendship, the connection, the unity and that was actually the first time I thought, 'Wow, this could be something!' At first we didn't even dare to put the song on the first side. It was vinyl. I thought, 'Okay, it's the first song on the second side.' Then somebody said 'Hey, why don't you put it on the first side, first song?' So we thought 'Okay…' Somehow, it was unstoppable without us even doing something. Somebody said 'Hey, let's do a video.' We had a great video guy. His name was Mark Rezyka. He flew to New York and he came to the office of our manager. He said 'I have this idea of putting in the 'warlock' and filming it in L.A.' It was at the river basin where 'Terminator 2 [Judgment Day]' was filmed. We were so lucky to have it put on heavy rotation, the 'All We Are' video. It was great. Sometimes we didn't even know why it was happening, but it was happening. It was a lot of magic and maybe God said, 'Okay, you guys now have a little hit.' It was a little bit surprising. But when people were singing on it in the studio, I could tell there was some magic there which was powerful."

On whether she was worried about making the transition from WARLOCK into a solo career in 1989:

Doro: "It wasn't my choice [to change the name]. We got into some legal problems; actually somebody stole the name. We actually couldn't really prove it. It was a mess. When I started out, I was a little metalhead; I wanted to have fun with music. Suddenly, it was the 'music business' and lots of sharks came in and I thought, 'This can't be. It can't be.' It was for me, heartbreaking and for the fans as well. The only way to continue in music was naming it DORO. The record company said, 'Hey, we don't want to support another band or new name.' I said, 'How about you call it DORO? Maybe some of the old WARLOCK fans will connect or will know who it is.' They said, 'Okay, let's do it for one record. The next record we'll call it WARLOCK again.' But it never got to that. It took 20 years to get the rights to the name back, so yeah, for twenty years we had to just try with what you have, the best way you could do it. Yeah, but I never wanted to have a solo career. It was shocking. I wanted to do music. I wanted to rock the fans and stay metal, but yeah, it's always going up and down. I get many bands, many musicians, they probably had to go through that. Yeah, it's not always positive. You hope that will always go up and up and up, but then, certain things change. The taste of music changed and suddenly grunge became huge and the normal metal bands, they were shoved to the side. It was tough. I'm experienced in the greatest moments and some really tough moments, too. You just have to hang in there and always try your best and always try to survive and never give up. That's what I've tried to do."

Pesch is currently celebrating the thirtieth anniversary of the aforementioned "Triumph And Agony" album by performing the LP in its entirety at select shows around the globe. "We did already two shows — one in Sweden Rock, a big festival in Sweden, really nice, and Norway Rock, and it was killer," she told "SixX Strings". And especially playing the 'Triumph And Agony' album, I think it sounds really good. We definitely wanna do a live record eventually."