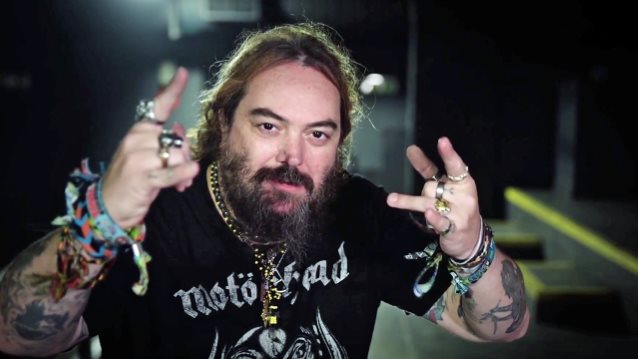 MAX CAVALERA On SEPULTURA's 'Roots': 'It Changed The Rules On How You Make Records'

Australia's The Moshpit Backstage podcast recently conducted an interview with former SEPULTURA frontman Max Cavalera (guitar, vocals) about the "Return To Roots" tour during which he and his brother Igor Cavalera are celebrating the twentieth anniversary of the band's classic album "Roots" by performing the LP in its entirety. You can listen to the entire chat below. A few excerpts follow (transcribed by BLABBERMOUTH.NET).

On playing "Roots" in its entirety live:

Max: "It's even better than it was twenty years ago because there's less pressure now. I'm just really doing it with my brother and playing the whole record. I think it was a really important record for us and for metal, in general. I think it changed the rules on how you make records. You could put more influences on it, like different styles and cultures and things like that. Metal was never done like that before. It was really exciting. In the center of the album, we went to the tribe, the Xavante tribe in the rain forest and got painted by them and were part of their rituals. That was really cool. I think the record itself, is a really heavy, good record, really exciting, really energetic. We're playing the whole thing now. It was a tour that came out of an experiment, but it really worked out. It sold out everywhere: Europe, America, South America and we're now coming to Australia. It's really exciting to play the whole record from the beginning to end. It's a great, powerful record. We're really proud of it. It's better now than ever to play this record."

On what it's like playing old SEPULTURA material with his brother Igor:

Max: "It's great because it's a bit different from CAVALERA CONSPIRACY. We do have an album coming out in October; it's all done now, it's a new album. 'Roots' is something we did twenty years ago and was a big part of our lives. It was the biggest record we ever did. But, it was a really [tumultuous] time in our life. We couldn't really enjoy the touring or the success of the album. Now, doing it twenty years later, everything is much better now. Everything is more peaceful and calm. We're just really loving playing the songs and it was fun dissecting the record to play this tour. We had to go through every single song, everything on it, even the tribal sounds, and the Indian sounds and everything. It was a lot of work we put on the tour to make it perfect like it is now. Now that's all done. Whoever has been to the shows really likes it a lot. We had a really positive reaction from the fans, who were really loving what they heard. We have a really good band with Marc Rizzo and Tony Campos. Marc is a great guitar player; Tony is a great bass player, then there's me and Igor. We're really enjoying it, playing the record."

On the variety of audiences who have come out to the "Return To Roots" tour:

Max: "We have old people who were alive when the album came out, so they're coming back to the shows. They're the same age as us and there's also new kids, young kids, who weren't born when 'Roots' came out, but they love the record. It's so fun. I think it's cool the young generation discovering stuff like SEPULTURA's 'Roots' and the other metal from that era. It was a really good time in metal. We had PANTERA, SLAYER, BIOHAZARD, FEAR FACTORY, the '90s were big for metal, I think. Really good records were released at that time. It's so cool for me to see these young kids, this new, young generation loving it and wanting to hear and be part of some of that when they weren't even born when it was around. I think it's the same thing that happened to thrash metal. A lot of the young kids weren't born when thrash metal came out, but they love it. There's even now bands playing thrash metal now like TOXIC HOLOCAUST, MUNICIPAL WASTE, NOISEM, and a lot of them weren't even born when thrash metal started. So, I think it's great. I think it shows that metal is a great form of music and it has no age limits. [You] can be really young or old. Metal is for everybody; that's all I'm trying to say. It's great."

Max: "It's a beast of a record. I'm so proud of it. It's nine songs of pure power. There is nothing holding back. It's pure energy and aggression. But, it's really well-done. It's really well-made thrash songs with a lot of parts and really cool, intricate tempo changes and we spent a lot of time making this record. I, by myself, I spent two months just on the riffs on the album. It's produced by our friend Arthur Rizk. He did the POWER TRIP and INQUISITION records. He's an underground producer with a really good ear. We have one song guested by Justin [Broadrick] from GODFLESH. It's kind of a GODFLESH-NAILBOMB-CAVALERA song. It came out great. I'm super-proud of this record. I can't wait for people to hear it. It's one of my favorite records I've ever done. I'd put it neck-to-neck with anything I've ever done like 'Arise' or NAILBOMB. It's got the same vibe of those records, so I think people are going to be pretty excited hearing the record."

"Psychosis" will be released on November 17 via Napalm Records.