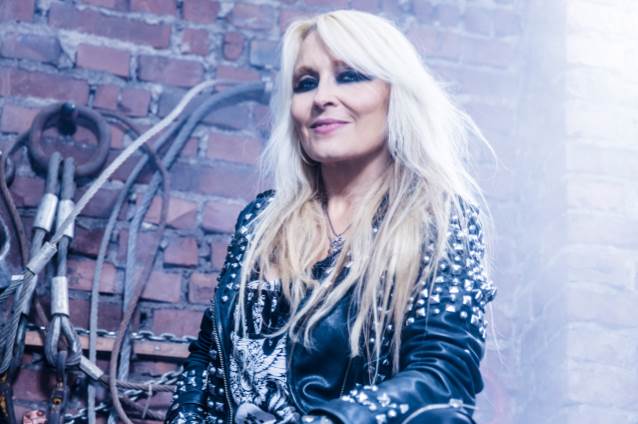 Dawn Osborne of TotalRock Radio recently conducted an interview with German metal queen Doro Pesch. You can now watch the chat below. A couple of excerpts follow (transcribed by BLABBERMOUTH.NET).

Doro: "It has 25 songs on it. I think it came out really good. And the first one, 'Forever Warriors', is maybe a little bit heavier or has more anthems on it. And the second one is maybe a little bit more soulful and has one more ballad on it. But I love 'em both. And it's the first double album ever and it's my record No. 20. I was so inspired by so many things which happened. Actually, one heartbreaking experience was when Lemmy [MOTÖRHEAD] left us. Lemmy was one of my best friends in the world — definitely in the metal world. And I was on the plane, and I was flying to his funeral, and then the song 'Living Life To The Fullest', it just came out. Actually, the lyrics were done, the melody was done. And then I switched on my cell phone, of course. [I thought] I should do it in the plane, but I didn't. Becaue I thought, 'I wanna lay it down right now.' And it's for Lemmy, to honor him. And then I went to Hamburg and I recorded it with a good friend of mine, Andreas Bruhn; he was the ex-guitar player of SISTERS OF MERCY, and we worked together for a long time — 22 years. And I said, 'Andreas, I've gotta record it right away.' And he said, 'Yeah, come on over.' And then we recorded the song. With Lemmy, I was so heartbroken. On the other hand, it gave me so much energy to do it — to do another album, to write songs. And then it was all flowing out. And then, in the end, 25 songs made the album. There were more songs; [we had] 35 songs [written in total]."

On when she first realized she wanted to become a singer:

Doro: "My first experience with music, actually, I was three years old. And it wasn't back then, unfortunately, but it was the artist Little Richard. This one song, 'Lucille', was mindblowing, and he had so much energy, so much passion. And his live performance — I'd seen him many times. So I was three years old, and this wish, the dream, was growing. And then I grew up in a time when SWEET, SLADE, T.REX, Alice Cooper and Suzi Quatro were big, so I was very inspired by that; I was six or seven years old. And then I had my first band [when I was] 15, and actually, we just did what we loved — we didn't know that it was called 'heavy metal.' And then some fans came into our rehearsal room, and they said, 'Are you guys a metal band?' And I said, 'Oh, that sounds cool. I guess so.' But we had no idea. And then we were part of the metal scene."

On which metal bands inspired her:

Doro: "All the great metal bands in England, like the [New Wave Of British Heavy Metal] was very influential — like JUDAS PRIEST and IRON MAIDEN and MOTÖRHEAD and SAXON and all the great ones. And then, one time, it was actually when I quit my job in 1986, we got the JUDAS PRIEST tour, so we were the support band of JUDAS PRIEST in '86 all over the world. And in England, it was W.A.S.P. And Blackie Lawless, he was very nice to me — he treated me very nice. Because I got so sick. When I did the JUDAS PRIEST tour, I was always walking on the ice; we played ice-hockey venues in Scandinavia. And it was cold, and the road crew of JUDAS PRIEST [told me], 'Hey, little girl, don't walk on the ice.' And I said, 'Oh, it doesn't matter. I'm made of steel. It's okay.' So one day later, we hopped on tour with W.A.S.P. in England, and I was so sick. And then [Blackie] was so sweet to me. He said, 'Okay, you can go into my dressing room and rest.' He gave me some magic potions, vitamins — all that stuff. And he said, 'I will wake you up when it's time for you to get ready.' And I will never, ever forget that. Maybe he doesn't remember that, but I remember — he was definitely looking after me. And then we started the England tour. And then the next tour was, actually, with Ronnie James Dio in '87, which was unbelievable. So I was definitely lucky, touring with my heroes, with the best bands in the world — like PRIEST and W.A.S.P. and DIO and MOTÖRHEAD and SAXON. And now we're actually going on tour with SAXON again in November — after we play all the summer festivals. [We're playing U.K.'s] Bloodstock [festival]. I'm so happy, because it's the same day when JUDAS PRIEST is playing there as well. I met Rob Halford a year ago, and we had such a great chat. So I'm very excited about it."