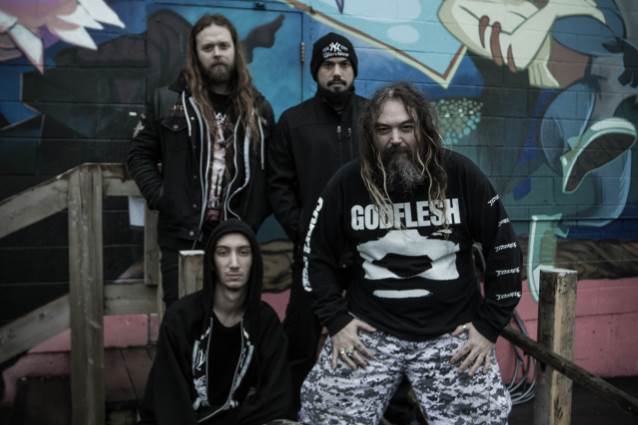 SOULFLY To Release 'Ritual' Album In The Fall; Listen To New Song 'The Summoning'

SOULFLY has set "Ritual" as the title of its new album, tentatively due in October via Nuclear Blast. The follow-up to 2015's "Archangel" was recorded with producer Josh Wilbur, who has previously worked with LAMB OF GOD, GOJIRA and ALL THAT REMAINS, among others.

Fan-filmed video footage of SOULFLY performing a new song called "The Summoning", which will appear on "Ritual", on June 28 in Zwolle, Netherlands can be seen below.

Max recently told PureGrainAudio about "Ritual": "I know musicians [always] say their new record is their favorite, but [this new] SOULFLY [album] really hits home, man, because it's got a little of everything that I really love about SOULFLY. It's got some of the tribal elements back in the groove, and it's got a lot of fast stuff. It's almost like a 'tribal thrash' record, which is kind of… it's never been done before. So it's a real political and spiritual [album mixed] with tribal [and] thrash [sounds]. The tribal grooves go right in hand with fast thrash, death metal stuff. So it's pretty cool, man. I think people are gonna be turned up when they hear the new SOULFLY."

Max told Jack Antonio that the new SOULFLY album would include "a song about a Navajo murder that happened on a Navajo reservation — the police killed this young girl and I was really intrigued with the whole story and we made a song out of it," he said.