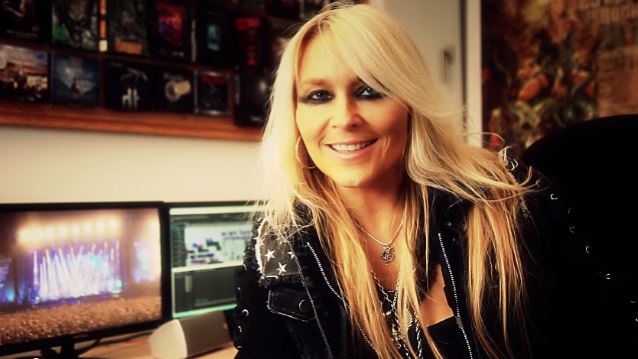 In a brand new interview with the Phoenix New Times, German metal queen Doro Pesch was asked if she could recall a memory when she first realized that the industry was embracing more females in heavy metal.

"I love music and I loved the fans right from the start," she responded. "I had a great connection to the art and to the fans. To me, in metal, it doesn't matter if you're a woman or man; music isn't about that. So I never felt like I got negative feedback or feelings. I was just Doro! Everyone was so supportive, especially my other musicians or bands on tours, whether it was the legendary JUDAS PRIEST or the greatly loved and missed Ronnie James Dio and W.A.S.P. — we just had so many excellent tours and everyone was so nice and respectful."

She continued: "In the industry, it was always cool and I never felt different. I just know in the media and in magazines, they were writing things like, 'one of the few women of heavy metal,' but, to me, honestly... I think people knew I was deadly serious and dedicated, so people maybe didn't question it."

Doro added: "People might've thought it was crazy or different, a woman in heavy metal, but I never felt different. I think it was more, um, you had to fight more for your music; you had to fight more to do heavy metal. Because in the beginning with metal, it was accepted as a whole. So you had to really work your ass off, work 10 times more, to make other people feel like metal is something really beautiful. So, as a metalhead, I had more issues in the beginning just having people accept metal in general. [Laughs] Yeah, yeah! Metal has so much power and soul. It's about fighting for your music; to fight for heavy metal. That was way more difficult than fighting to be a woman in the genre."