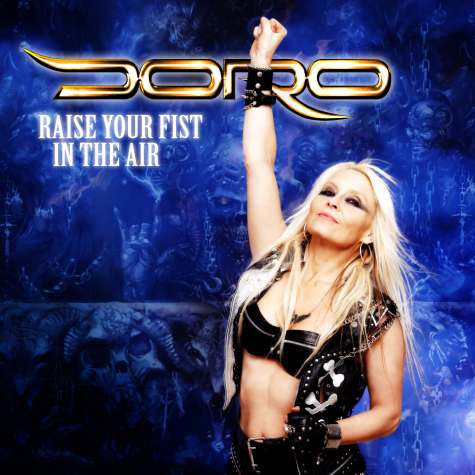 German metal queen Doro Pesch will release a new EP, "Raise Your Fist In The Air", on August 3 via Nuclear Blast Records. The effort will be made available on CD, vinyl and as a digital download.

"Raise Your Fist In The Air" track listing:

In a 2011 interview with Canada's XplosiveMetal.com, Pesch spoke about the song "Raise Your Fist In The Air" which she played for the first time at last year's Wacken Open Air festival in Wacken, Germany. ""It got great feedback [from the Wacken audience]. . . . It was originally written by a Wacken fan, a metalhead, and then I did my own thing to it. It was actually a diehard Wacken fan who did a demo and sent it to the promoter. He sent it to me and said, 'Hey, how about we make a Wacken anthem and here's an idea from a diehard Wacken fan.' I listened to it and thought, 'Hey, that's great.' Then we worked on it and continued working on it. Just to tell you how that song came about, it was a collaboration with a diehard fan and it was actually really good. Sometimes the fans have the best ideas. It was so dead-on."

Fan-filmed video footage of Doro performing the song "Raise Your Fist In The Air" on October 1, 2011 at the Milk club in Moscow, Russia and October 22, 2011 at the Metal Female Voices Fest IX, held at the Oktoberhallen in Wieze, Belgium, can be seen below.

"Raise Your Fist In The Air" (song) performance footage (October 1, 2011 at the Milk club in Moscow, Russia):

"Raise Your Fist In The Air" (song) performance footage (October 22, 2011 at the Metal Female Voices Fest IX, held at the Oktoberhallen in Wieze, Belgium):