The fittingly titled "NOLA Town Throwdown" will take place at the Fillmore in New Orleans, Louisiana. Fans can attend the show in person while those who can't make it, can still catch it in real time from the comfort of their living room. Support will be provided by special guest comedian Dave Hill.

Comments Anselmo: "It's gonna be great to play our hometown again! Always a blast!"

Says Keenan: "'NOLA Town Throwdown' is a long time coming. Let's do this and make it epic! Up the hammers!"

Adds Bruders: “Through the hard times and now for the good times, this is gonna be a very special show for everyone! We're ready to turn it up and slam it DOWN!"

Says Windstein: "Playing on stage with my brothers in DOWN is always a special moment to me. We can't wait to blow the roof off of The Fillmore! Being in NOLA takes this to a whole new level!"

States Bower: "It's been way too long, y'all! I can't remember the last time we played NOLA. On Friday, August 13th we will play our hometown. A DOWN show y'all! Old friends, good times, and great tunes on a superstitious night! We're ready to jam, are you?"

Tickets go on sale Friday, July 9 at 10:00 a.m. central time through LiveNation.com for the live event and Down-Nola.com for the livestream. Don't miss out — tickets will go quick!

Plans for select shows featuring Anselmo, Keenan, Windstein, Bower and Bruders performing the record in its entirety were sidelined due to the global pandemic. In its wake, the band took part in the livestream. 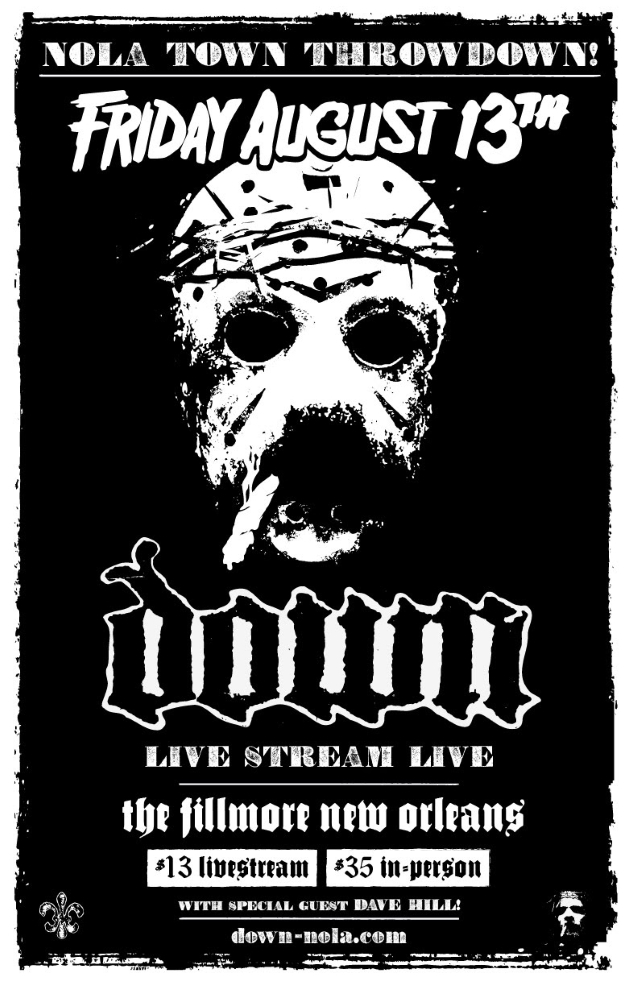