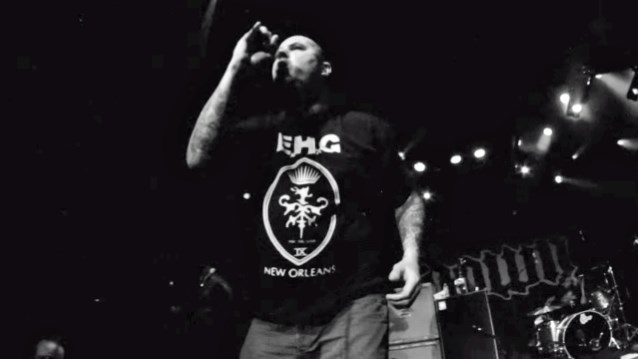 DOWN: 'We Knew Him Well' Video Released

DOWN's video for the song "We Knew Him Well" can be seen below. The clip was filmed at Southport Hall in New Orleans, Louisiana by Mike Holderbeast and the Cement Level crew.

"We Knew Him Well" is taken from DOWN's latest EP, "Down IV - Part Two", which sold around 10,000 copies in the United States in its first week of release to debut at position No. 23 on The Billboard 200 chart.

Speaking to Revolver magazine, DOWN frontman Philip Anselmo stated about "We Knew Him Well": "I kinda like people to think for themselves and come up with their own conclusions, because a lot of times I'll have a couple of specifics in mind and then somebody will come along and say to me what their thoughts are on a certain songs is about. And I find it really interesting, because it's something that I haven't even considered before in my life and it makes sense to me the way they explain it. So, 'We Knew Him Well' is about several different people, not just in my life, but the lives of my bands, family life, anybody that is, I guess, very very close to you. That's one I wrote for them."

"Down IV - Part Two" was released on May 13, 2014 via Down Records/ADA Music. Tracked at Nodferatu's Lair — Anselmo's home studio — and produced by Michael Thompson, Anselmo and DOWN, the EP was the eagerly anticipated sequel to "Down IV - Part One". The new offering from DOWN is packed with the quintet's signature gargantuan riffs, swamp blues leads, crashing drums and hypnotic howls, upholding a certain tradition that countless fans celebrate, expanding their own musical mythos as they leave its pillars intact and untouched.