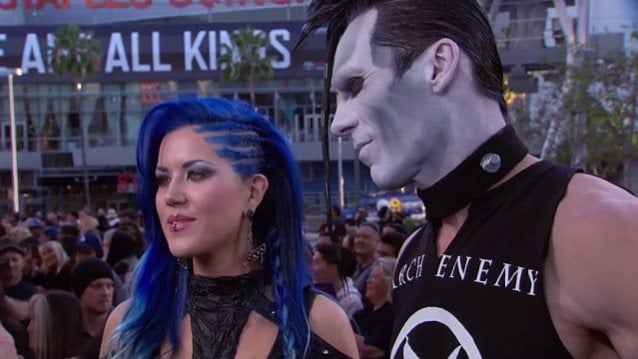 In a recent interview with Jay Nanda of San Antonio Metal Music Examiner, former MISFITS guitarist Doyle Wolfgang Von Frankenstein was asked how he celebrated when his much younger girlfriend, ex-THE AGONIST singer Alissa White-Gluz, landed the gig as the frontwoman of ARCH ENEMY.

"We cried, actually," he replied. "She told me, and she was crying when she told me. I'm like, 'Is that bad?' She said, [Doyle adopts a higher-pitched voice] 'No, it's great. That's my favorite band.' Then when they did the announcement, she had to change all her social media (statuses) in the kitchen, and she said, 'Don't talk to me 'till I'm done with this.' She was hyperventilating while she was changing it all. She was, like [Doyle makes hyperventilating sounds]. Shut the computer, got up and went in the back, came back, and she started crying for, like, 20 minutes."

Doyle, who was previously married to former pro wrestler Stephanie Bellars (a.k.a. Gorgeous George). told Revolver magazine earlier in the year that he and Alissa met when "I was doing the DANZIG tour last year and she was on the first leg with her old band [THE AGONIST]. I met her the first day and I couldn't think anymore — still can't.

"She's the Queen Beast of metal! It's the way she sings — nobody can out-beast her."

Doyle was also full of praise for "War Eternal", ARCH ENEMY's recently released album which is the band's first to feature Alissa's vocals. He wrote on his Instagram: "This album is fucking bone crushing. I had the honor and privilege of hearing it at the kitchen table and in the car while the Queen Beast was working on it and writing lyrics. The demos sounded amazing… and then… when the real tracks came in… we could not believe our fucking ears!

"Go buy this on hardcopy or download off iTunes… Guaranteed satisfaction… You won't be sorry. It's fucking awesome."