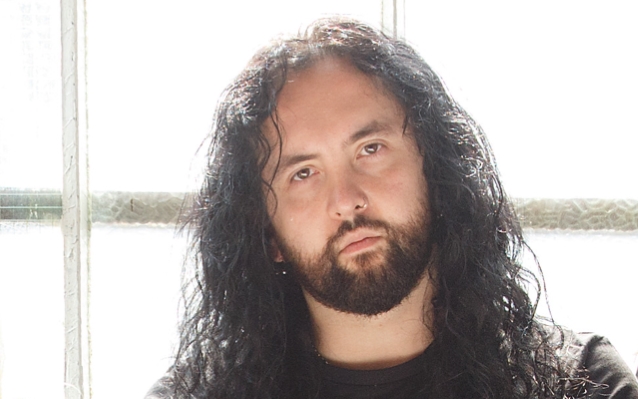 French musician Frédéric Leclercq, who plays bass in the British-based power metal band DRAGONFORCE and guitar in the death metal supergroup SINSAENUM, was asked by Austria's Stormbringer which subgenre of heavy metal he prefers: power metal or death metal. He responded (see video below): "Death metal. I like every kind of metal — I love metal. I like heavy metal, I like thrash metal, I like black metal. Power metal, actually, not so much, but when I discovered the style basically 20 years ago, actually, I liked ANGRA; SYMPHONY X — I don't know if they're power metal or more prog; RHAPSODY, when the album 'Symphony Of Enchanted Lands' came out, I was, 'Wow!' So that was something I liked. And then I was, like, going back to… 'cause I discovered death metal before, so I liked that, but then I went back to death metal. But, for some reason, I must be good at power metal, because I ended up playing in a French band called HEAVENLY, and now I've been with DRAGONFORCE for 13 years. So it's not the genre I would prefer, but it's still metal, it's still music, so who am I to complain? But if I had the choice between a power metal concert or a power metal album and a death metal concert or a death metal album, I would definitely, a hundred percent go to death metal."

DRAGONFORCE recently entered the studio with producer Damien Rainaud (FEAR FACTORY, ONCE HUMAN) to begin recording its eighth album, due out 2019 via Metal Blade Records in the USA. Fans can watch livestreams of the studio sessions now on Twitch at twitch.tv/hermanli. Plus, all followers of the Twitch page will have a chance to win Herman Li's personal signature guitar once he reaches 10,000 Twitch followers.

DRAGONFORCE's latest album, "Reaching Into Infinity", was released in May 2017 via earMUSIC on CD, LP and a special-edition CD and DVD. The follow-up to 2014's "Maximum Overload" marked DRAGONFORCE's third full-length studio release with singer Marc Hudson, who joined the group in 2011 following the departure of original frontman ZP Theart (now in SKID ROW).