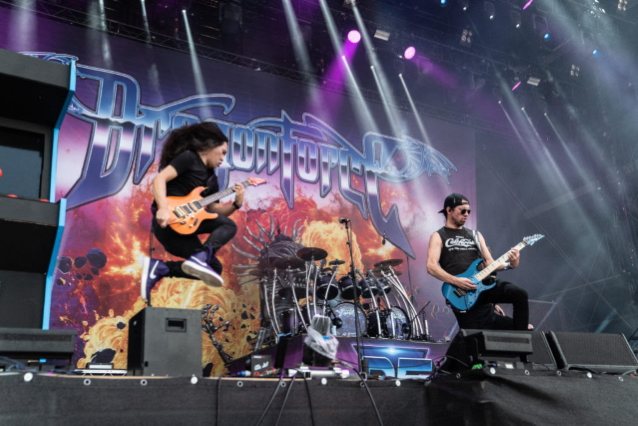 DRAGONFORCE guitarist Herman Li was a guest on the latest episode of Nuclear Blast's "Saturday Night Lockdown" with host Francesco Paoli of FLESHGOD APOCALYPSE. Asked how he has been spending his coronavirus downtime, Herman said (see video below): "We played our first show [in support of our eighth full-length LP, 'Extreme Power Metal'] on the album release date [last September], which was on TwitchCon, which is a Twitch convention. And we got that streamed to, like, 1.7 million people. Everything started out great — it was awesome. We had a sold-out tour happening. Everything was going well. We were gonna film a music video for every single DRAGONFORCE song on the album, and we got halfway through it, and COVID-19 happened. So the tour stopped. And some videos, we can't complete them. We filmed all of it, but we need some more footage. So we've got videos on hold now. And instead, we're writing a new album. Why not? Just like everybody — you just write a new album when you're sitting at home. And strangely enough, it's almost finished. [Laughs]"

Speaking about the DRAGONFORCE songwriting process, Li said: "The way DRAGONFORCE work is the only time you can write is when you're not touring. So if we don't write something now and work on something now, we can never finish it, because the touring starts next March at the moment. I looked at my dates and [went], 'When is this gonna stop?' And I kind of thought, 'Well, is it really gonna start next March?' Depending on the country. So, it's, like, we've gotta get this album recorded — most of it — before the touring starts. You basically have to finish it before the touring starts — that's my view. That's only possible, obviously, if you can record yourself, and we always record most of the album ourselves."