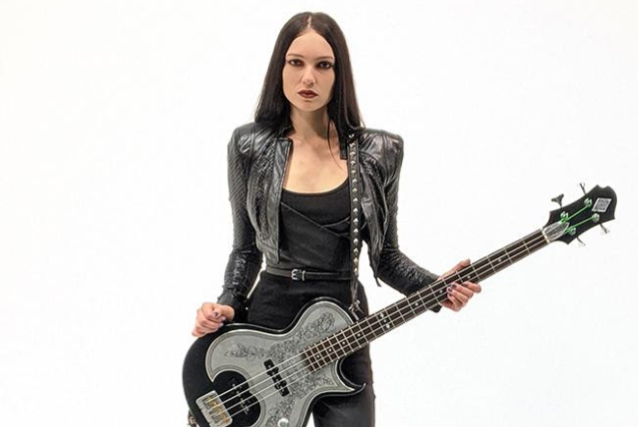 This past September, DRAGONFORCE unleashed its eighth full-length, "Extreme Power Metal", worldwide. In support of this release, the band will head out on the road next month in Europe, before touring the USA with UNLEASH THE ARCHERS and VISIONS OF ATLANTIS. Both of these treks will see Alicia Vigil (VIGIL OF WAR) handling bass and backing vocals for DRAGONFORCE.

Vigil comments: "So beyond stoked that DRAGONFORCE chose me to be a part of this! I can't wait to travel the world and play these new cities with them and be a part of their legacy!"

DRAGONFORCE guitarist Herman Li adds: "Alicia was recommended to me by a number of musician friends in L.A. She impressed me with her playing, her professionalism, and her ability to learn the DRAGONFORCE songs really quickly! I'm excited to have her playing on this tour and I think the fans will really like what she brings to the show."

DRAGONFORCE will be streaming its world tour live on twitch.tv/hermanli. Livestreams will include performances, backstage and special guest appearances.

Last March, the "Through The Fire And Flames" music video reached a new milestone: it surpassed one hundred million views on YouTube — DRAGONFORCE's first music video to do so.