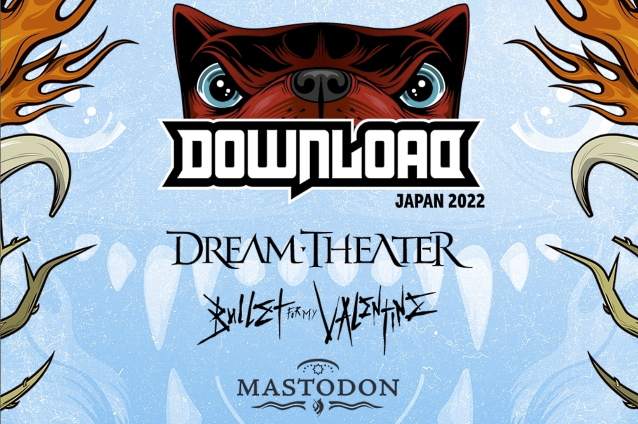 DREAM THEATER, BULLET FOR MY VALENTINE And MASTODON Among Confirmed Acts For DOWNLOAD JAPAN 2022 Festival

DREAM THEATER and BULLET FOR MY VALENTINE will headline this year's edition of the Download Japan festival, set to take place on August 14 at the Makuhari Messe International Exhibition Center in Chiba. Also scheduled to appear are MASTODON, STEEL PANTHER, AT THE GATES and THE HALO EFFECT, with more acts to be announced at a later date.

The festival held its first installment in 2019, featuring SLAYER, ARCH ENEMY, SUM 41, HALESTORM, and more, and was slated to take place in 2020 with headliners MY CHEMICAL ROMANCE alongside MINISTRY, AMON AMARTH and more, but ended up getting canceled due to the ongoing coronavirus pandemic.

The U.K. edition of Download was launched in 2003 and has taken place at Donington Park in Leicestershire. It annually attracts around 100,000 people.

Before Download, Donington Park hosted the Monsters Of Rock festival, which was created in the early 1980s.

Download festival was founded by Stuart Galbraith, Tom Pyke and Andy Copping, who reportedly chose the name to emphasize that in the 21st century the Internet provides connectivity for the rock audience. In 2003 festival tickets even had a code which would allow downloading of tracks that were played at the festival.

Download has an official mascot — the Download Dog. It appears at campsites and on promo materials related to the festival — flyers, tickets, stage banners and various merchandise. The dog's name is Dexter.