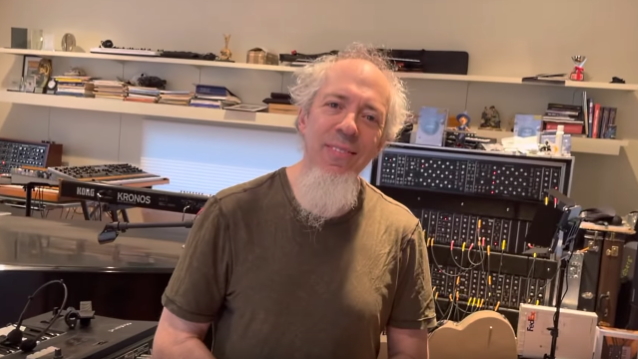 In a new interview with Finland's Kaaos TV, DREAM THEATER keyboardist Jordan Rudess was asked if he thinks platforms like Patreon, which allows fans to become direct supporters of content they love, is going to be the way of the future for many musicians, even once the coronavirus pandemic has subsided. "I really think it's moving in that direction more and more," he said (as transcribed by BLABBERMOUTH.NET). "I think it makes so much sense. I like it. In general, I feel great about it. The parts that are a little troublesome are when you think about a young artist who doesn't necessarily have a following. How do you develop your career? You don't have the record company putting money behind you to build your career. You have to figure out ways to use the Internet to get your music out there. It's very hard, because we're overwhelmed with music and musicians. There's plenty of ways to put your music out there, but are you gonna get it heard? Is it gonna make a difference? Is it gonna make any money? That's the problem. That's challenging. So some of these companies have to figure out ways to help musicians. And obviously, people are working on it, but to help them get noticed and make those mechanisms more streamlined so it gives people the opportunity to have a music career."

He continued: "I would say to somebody, even if they're extremely talented, I'd say, just realize that the chances of making money with this are very, very small — minute — no matter how good you are. So think about how you can make money without having to rely on the music that you're doing to make that money. It's a much safer way to do it. If somebody has a great brain for more than just music, how can you find something that you make money with that you can also have some time so you can be a happy musician and buy the instruments that you want. And not have to rely on, 'I've gotta get a gig playing in a bar somewhere, 'cause I have no money, and I'm scraping pennies off the floor.' It's not bad advice, and I'm sad to have to say it, because I'd like to have people, young [and] old, who make music think that, 'Okay, I'll just do this, and that's gonna be my life.' And that's getting really, really hard."

Jordan has been the full-time keyboardist with DREAM THEATER since the recording of 1999's "Metropolis Pt. 2: Scenes From A Memory". Beyond DREAM THEATER, he has released a number of acclaimed solo works and has also blazed a trail in helping to evolve the art and science of keyboard controllers. He created the successful app development company Wizdom Music, which has developed award-winning apps, including MorphWiz, which won the first-ever Billboard award for "Best Music Creation App". Wizdom Music has also built apps for Intel, Microsoft and RIM.