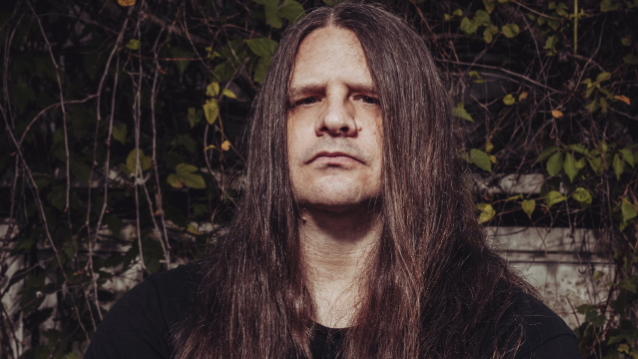 CANNIBAL CORPSE frontman George "Corpsegrinder" Fisher, whose group has been the subject of much controversy over its horrifically graphic cover art and lyrical content, has told Terry "Beez" Bezer of Knotfest.com's "Mosh Talks With Beez" that there are some things he and his bandmaes won't write about. "CANNIBAL CORPSE, we pride ourselves — we don't sing about politics; we don't sing about religion. We keep out of it," he said (as transcribed by BLABBERMOUTH.NET).

Fisher also weighed in on people who contribute to the vitriolic tone that puts so many off engaging in public online conversations.

"My whole thing is, if you're a good person, you're a good person," he said. "If you believe in certain things politically or philosophically [or] religiously, good for you. We don't have to agree. I don't hate you for it. But some people can't let it go, and the Internet goes crazy. Everybody's posting things, 'Oh, this person is doing that, and he likes Trump,' or, 'This person is doing that, and he likes Biden.' And it's just, like, 'Oh, man.' We can't get all along right now, 'cause we're supposed to stay away from each other. But it's, like, online everyone is stir crazy and attacking each other."

CANNIBAL CORPSE's 15th studio album, "Violence Unimagined", was released on April 16 via Metal Blade Records. Erik Rutan, one of the death metal's most acclaimed guitarists who is known for his time as part of MORBID ANGEL throughout the '90s and early 2000s, as well as handling vocals/guitars for HATE ETERNAL, lent his guitar as well as production skills to the effort, which was recorded at his Mana Recording in St. Petersburg, Florida. Rutan previously produced four CANNIBAL CORPSE albums (in addition to "Violence Unimagined"),alongside the likes of GOATWHORE, SOILENT GREEN and BELPHEGOR. Filling in live on guitar since 2019, in 2020 he became a full member, contributing to the writing process.