Progressive metal giants DREAM THEATER have postponed their previously announced North American tour to early 2022 due to COVID-19 concerns. The trek was scheduled to kick off on October 28 in Mesa, Arizona and conclude on December 14 in St. Petersburg, Florida.

DREAM THEATER shared the news of the postponement in a statement posted on social media earlier today (Monday, September 27). The group wrote: "DREAM THEATER have made the difficult decision to move their October-December 2021 North American tour dates to early 2022. In light of current instabilities to touring that remain due to the COVID-19 pandemic, we feel confident that this is the right decision.

"Know that we are as disappointed as you are that we will have to wait a little longer to bring DREAM THEATER music to you live. We miss performing for you all and can't wait until we can be on stage bringing our new album and fan-favorites to you.

"This was an extraordinarily challenging decision to make but needed to be done after taking into consideration the varying local mandates across North America. In an effort to present the absolute most complete and engaging DREAM THEATER experience that our fans around the globe have come to expect, we feel we are all best served to postpone all touring activities to early 2022.

"At this time, we ask that everyone hold on to their tickets as we are working frantically to finalize the reschedule of all of these dates. All shows are currently being re-booked to begin in February 2022. Please keep an eye on our website, and we'll have a complete, updated itinerary shortly. All previously purchased tickets will be honored. Please consult your local point of purchase for any inquiries regarding refunds.

"We know that we all have eagerly awaited a return to normalcy, and the opportunity to enjoy live DREAM THEATER music together again. We apologize profusely but hope that everyone can understand the logic behind this decision.

"Playing music for our fans is all we ever want to do. We look forward to seeing each and every one of our fans as soon as possible. We wish it could have been sooner, but we are counting the days until we can see you all again."

DREAM THEATER's 15th studio album, "A View From The Top Of The World", is due on October 22.

"A View From The Top Of The World" is DREAM THEATER at its musical finest expanding on the sound they helped create while maintaining the elements that have garnered them devoted fans around the globe. The seven-song album also marks the second studio album with InsideOut Music/Sony Music. The artwork was created by longtime cover collaborator Hugh Syme (RUSH, IRON MAIDEN, STONE SOUR). "A View From The Top Of The World" was produced by guitarist John Petrucci, engineered and additional production by James "Jimmy T" Meslin and mixed/mastered by Andy Sneap.

Dream Theater have made the difficult decision to move their October-December 2021 North American tour dates to early... 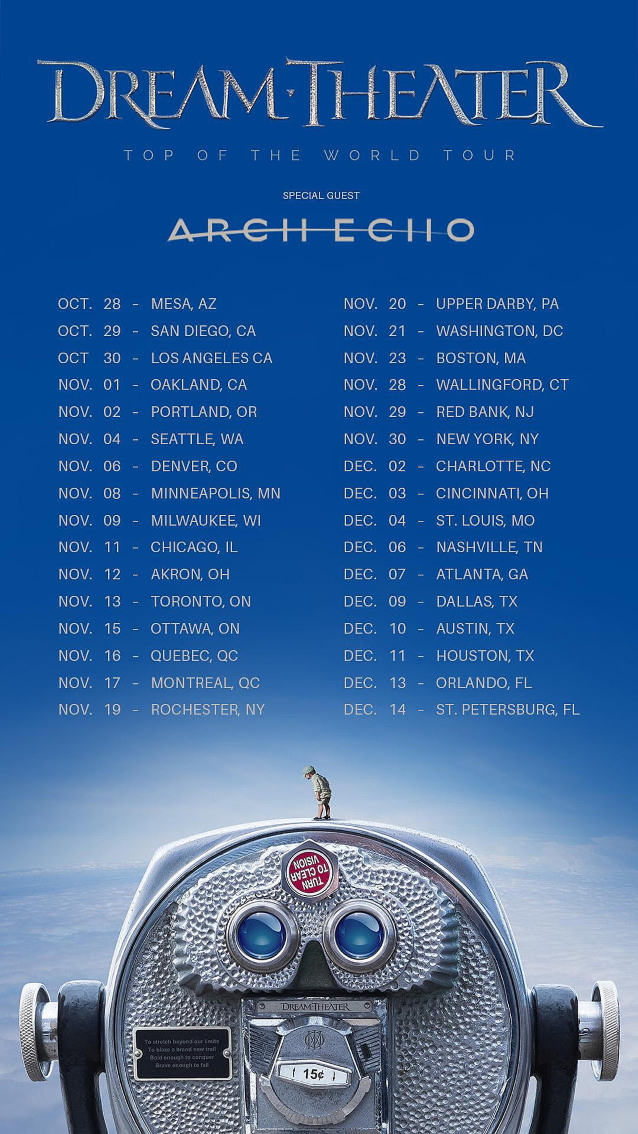