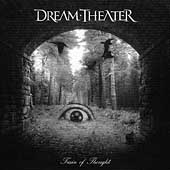 DREAM THEATER's new album, "Train Of Thought" (view cover here) is due on November 11 through Elektra Records. The follow-up to 2002's "Six Degrees Of Inner Turbulence" was produced by guitarist John Petrucci and drummer Mike Portnoy, engineered by Doug Oberkircher, and was mixed by Kevin Shirley, who has previously worked with IRON MAIDEN, LED ZEPPELIN and JOURNEY, among others.