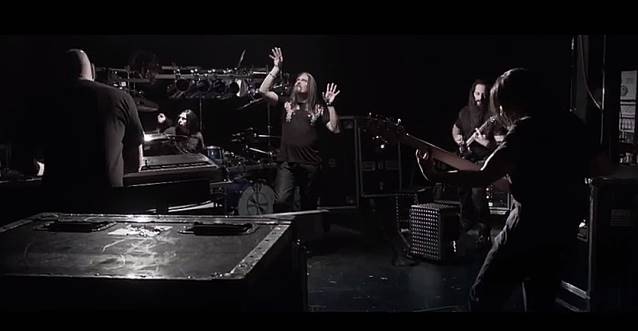 DREAM THEATER: 'The Looking Glass' Video To Premiere Next Week

Progressive metal giants DREAM THEATER have released the video below to promote their current tour and self-titled 12th studio album. The clip also includes footage from DREAM THEATER's video for the song "The Looking Glass", which will premiere on Monday, February 3.

DREAM THEATER has invited the esteemed Berklee College Of Music to join them for a one-of-a-kind show on the band's upcoming "Along For The Ride" North American tour when they visit the Boston Opera House on Tuesday, March 25.

DREAM THEATER will be joined by special guest ensembles the Berklee World Strings and the Berklee Concert Choir for the second half of the set. The ensembles will layer distinct dramatic elements to DREAM THEATER's production. The World Strings are an international group of creative improvisers who play with rhythmic qualities seldom heard from string instruments. The Concert Choir stretches its repertoire from traditional and contemporary music through a wide range of genres.

This special homecoming will be captured and recorded for a later release.

DREAM THEATER's "Along For The Ride" tour will pick up on March 20 in Toronto, Ontario, Canada following the band's European tour and then continues through the end of April where it will eventually wrap up in Guadalajara, Mexico.