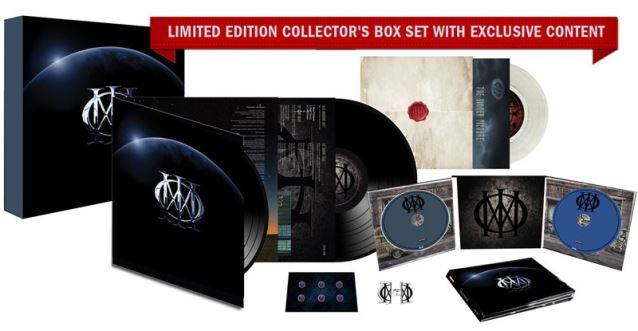 Video footage of the unboxing of the limited-edition box-set version of the new, self-titled album from progressive metal giants DREAM THEATER can be seen below.

The limited-edition box-set version of "Dream Theater" is available for $99.99 from the Roadrunner Records webstore.

"Dream Theater" is likely to sell between 30,000 and 35,000 copies in the United States in its first week of release, according to industry web site Hits Daily Double. The estimate was based on one-day sales reports compiled after the record arrived in stores on September 24 via Roadrunner

Speaking to Ultimate-Guitar.com, guitarist John Petrucci stated about "Dream Theater": "I think it's building on [what we did on the "A Dramatic Turn of Events" album], but taking it to the next level. One of the things I really wanted to do on 'A Dramatic Turn of Events' was to create something that was sonically very rich and high-def and powerful and I think we accomplished that. But on this album, I wanted to take that even further…. [I wanted to] get more cinematic with it and more earthy and aggressive and bigger. I wanted a bigger, more forward in-your-face kind of sound. I think that kind of dictated the sounds we went for while we were writing and recording and then ultimately how it was mixed. So yeah, it was kind of building on that, but taking it to the next level. You always need to progress and to try and do something different and kind of have a little bit different take on it and a different perspective. But hopefully make it better as you go."

The nine-track disc was recorded at Cove City Studio in Glen Cove, Long Island, with Petrucci producing and Richard Chycki engineering and mixing. It's the band's second album with drummer Mike Mangini, and the first one on which he was a part of the writing process from Day One.

"Dream Theater" was made available in a wide range of distinctive versions, including standard and special edition CDs, 180-gram double LP, and a limited-edition box set.

The video for the song "The Enemy Inside" was directed by Bill Fishman (RAMONES, STEVE RAY VAUGHAN). The strictly conceptual clip deals with the torment of a soldier who's struggling with reintegrating into his life back home due to post-traumatic stress disorder (PTSD).

Regarding the song's lyrics, Petrucci told Billboard.com: "At the time that we were in the studio working on the [new DREAM THEATER] album and I was writing lyrics, the Boston Marathon bombings happened. There was a lot of discussion of terrorism and PTSD as if affects people who witness traumatic events like terrorism, so it was just very on my mind. It linked very well with the mood of the song, and as we started to get into it, I watched some documentaries and things like that. I was like, 'This is really something that needs to be written about.'"