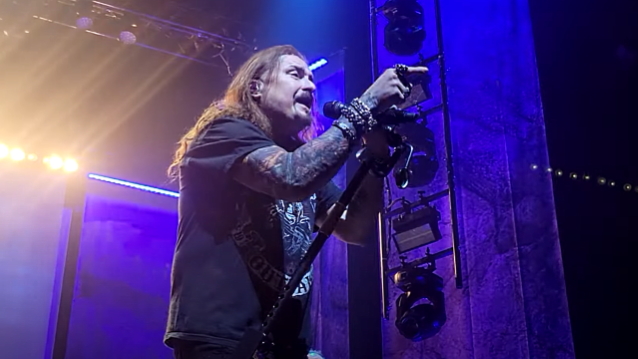 DREAM THEATER singer James LaBrie has pushed back against allegations that he uses pre-recorded vocal tracks during live performances.

The rumor that LaBrie has been relying on pre-recorded backing tracks gained strength last month after fan videos of DREAM THEATER's current North American tour were shared on YouTube. Some fans have pointed specifically to the post-chorus of the DREAM THEATER song "Bridges In The Sky" where the alleged lip syncing occurs.

LaBrie finally addressed the Internet chatter during DREAM THEATER's concert this past Friday (March 18) at Bayou Music Center in Houston, Texas. He told the crowd: "I'm gonna fucking clarify something for you now, okay? People have been saying I'm fucking lip syncing? Fuck you. Fucking, what is wrong with people online?"

He then apologized to the audience for his outburst, noting that he and his DREAM THEATER bandmates launched their current tour more than six weeks ago. "I guess I'm losing my mind because I'm almost at the end of a [tour] leg," he said.