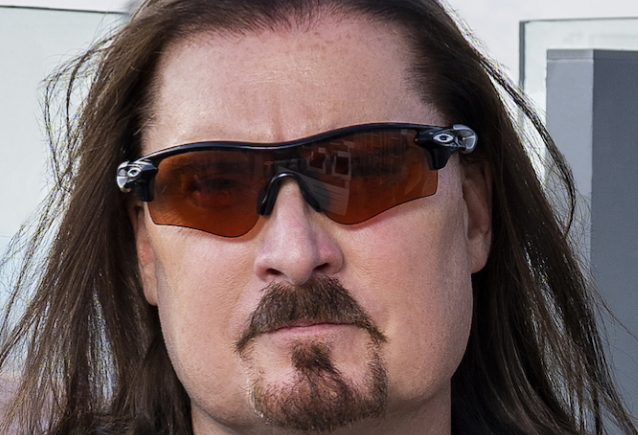 In a new interview with Canada's The Metal Voice, DREAM THEATER's James LaBrie was asked if there was ever any talk of him trying out for the singer position in IRON MAIDEN when Bruce Dickinson left the British heavy metal legends back in 1993. He responded (as transcribed by BLABBERMOUTH.NET): "Yeah, sure. Absolutely there was. Because at the time, we were being looked at to be managed by IRON MAIDEN's management. And so, [MAIDEN's manager] Rod Smallwood, at the time, we were playing darts, and he took me aside and he said, 'What do you think about…?'

"You've gotta remember — I was in a very bizarre situation," he continued. "DREAM THEATER, we had already recorded [1992's] 'Images And Words', we were looking for management, we were getting ready to try and set up a tour and get out there. And I remember him saying to me — he takes me aside, and the rest of the guys in DREAM THEATER were there too, playing darts, because we were looking at him for management. And he says, 'I just wanna throw something at you.' And he had his assistant with him too — Merck — at the time. And they were both standing there. They were going, 'What do you think about being the singer with IRON MAIDEN?' And I said, 'What? What are we talking about here? I'm confused. Are you not here for the reason that you might start managing DREAM THEATER? Or are you here to get me to become…?' And I had already recorded the [DREAM THEATER] album. Can you imagine how bizarre that was?'

LaBrie said: "Anyways, so I just said, 'No. No way. You know what? I'm gonna tell you the reasons why I'm not going to do this.' And they said, 'What's that?' And I said, 'One: DREAM THEATER. That's it. Period.' And I said, 'But if I need to go any further with this, way back when I was 22 years old, I sang for a band called CONEY HATCH for a year. And I walked [in as the replacement for] another singer [named] Carl Dixon,' and I said, 'and basically what I felt like was a glorified jukebox.' And I said, 'Because I came into the band, I was able to sing all that stuff no problem — no problem — but there was never that 'This is me. And this is what I created.' It was about, 'Are you looking at me for who and what I am?' I don't think so. And I don't think you ever will.

"Bruce and I have mutual respect for one another. We've met several times. We've done several shows. I remember doing the BBC show with him. And there was that mutual respect between the two of us. And I remember just thinking, 'I'm not gonna get out there and be singing MAIDEN every night — even though I think they're a great band, and Bruce is a great singer. No, thank you.' I need to create something that I can say, 'No, this is what I created from the beginning.' And we all know, okay, I wasn't on the first [DREAM THEATER] album, 'When Dream And Day Unite'."

James added: "And [the offer to audition for MAIDEN] came and went. As fast as it was asked, it was dismissed. And they went, 'All respect. Totally get it. No problem.' Boom. And we moved on."

After Dickinson left MAIDEN, the job went to WOLFSBANE vocalist Blaze Bayley, an odd choice considering that Blaze's singing voice is quite clearly a baritone in contrast to Bruce's tenor/alto range.

Bayley recorded two studio albums with IRON MAIDEN — 1995's "The X Factor" 1998's and "Virtual XI" — before Dickinson returned to the group. The MAIDEN albums Blaze appeared on sold considerably less than the band's prior releases and were their lowest-charting titles in the group's home country since 1981's "Killers".

Back in October 2002, DREAM THEATER performed the entire "The Number Of The Beast" album by IRON MAIDEN during its appearance at the London Astoria. The progressive rock heavyweights played the material exactly as per the original album, with the exception of "Gangland", which was done in a jazz style. DREAM THEATER, who feature a sole guitarist in the shape of the very-capable John Petrucci, reproduced the second-guitar parts by having keyboardist Jordan Rudess play them on the keys, including the solos.

Following an intermission in the regular set, then-DREAM THEATER drummer Mike Portnoy took the stage wearing a MAIDEN shirt, after which the classic "The Number Of The Beast" spoken intro kicked in. "The Number of The Beast" album cover was projected behind the group, but with DREAM THEATER in the style of the IRON MAIDEN logo.