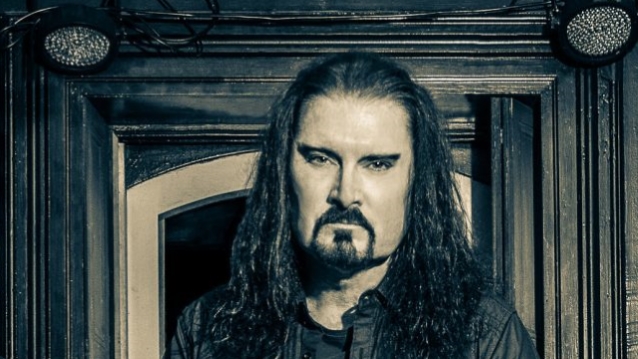 DREAM THEATER vocalist James LaBrie recently spoke with Two Doods Reviews. The full conversation can be streamed below. A few excerpts follow (as transcribed by BLABBERMOUTH.NET).

On whether he plays any instruments:

James: "I grabbed a guitar two years ago, so I'm slowly learning the dexterity that's involved in guitar playing, and I've gotta tell you, that's intimidating. Drums, I played from the age of 5 until I was 17. I thank God that I did that, because the rhythmic sensibility and especially being able to infuse myself in a band like DREAM THEATER naturally, it came from that fundamental background. I always thank my lucky stars that I did that. It just seems all natural. I'm not one of these guys — I don't want to count out all the crazy time signatures when I'm singing in between. It needs to feel natural — it needs to feel real."

On auditioning for DREAM THEATER:

James: "I saw myself as a frontman when I was 12. I always knew that the drums was secondary, because I started singing around the same age. The first couple bands that I formed, I was the lead vocalist and drummer. I was doing the whole Don Henley, Phil Collins thing. When I went down to do the audition, I was completely oblivious to any of the other singers that they had had [try out], which was probably a good thing. I know they told me — they go, 'We've been auditioning singers for the last two and a half years. We've worked with some for six months, eight months. [We've] recorded a ton of demos.' My [WINTER ROSE] CD happened to cross their laps, and they listened to it in [drummer] Mike Portnoy's van one night... When they brought me down, we basically went to the rehearsal hall. We jammed for about an hour or so, and we went through a lot of the songs from the first album and jammed on 'Lovin', Touchin', Squeezin'' by JOURNEY. They just kind of looked at me at the end. I didn't know their lingo, and at the time, [guitarist] John Petrucci looks over at me and goes, 'Dude, you're sick!' I said, 'Actually, you know what? I feel great.' He goes, 'No, no, no. I mean that in a great way.' The very next way, we went to [bassist] John Myung's condo and recorded three or four songs in his bedroom on an 8-track recorder. I was there for, like, five days doing stuff, and then I flew back home. They asked me before I left — they said, 'Dude, you've got to be in the band. Are you into it?' I said, 'Absolutely, but I'm going to tell you one thing — I'm staying in Canada. I don't want to move down here. I love it down here, but [it's not happening].' I'm in Toronto, so back in the day, that was, like, a 50-minute flight. It was no big deal."

On what he can do on his solo albums that he can't do in DREAM THEATER:

James: "I guess [on] the peripheral edge, there are progressive moments throughout some of the solo material, but for the most part, Matt Guillory and I, we've been a team — we've been doing this since 1998. Matt is a phenomenally talented piano player [and] writer. When we've been putting the songs together, our focus is really first and foremost on the songs having a bit more of a hard rock, very palatable... it's something that you can sink your teeth into as far as hooks. A lot of the hooks are coming from the guitar and especially the melody... Matt and I split the lyrics. He does half; I do half. We just want to create our own sound by incorporating some very heavy and aggressive moments, and there's even minimal — we use it sparingly, but I think it still has a purpose — grunt vocals. Peter Wildoer, the drummer, does that. He does a phenomenal job, but it's used more as a tool, and it's not necessarily, 'Oh, listen to this voice.' That's what I think maintains that equilibrium throughout. By doing these things, it kind of creates that separation between DREAM THEATER, because it wouldn't make any sense for me to do it [otherwise]... We just want to be more straightforward, but put some interesting moments into it that are a little more in the musicianship realm, so to speak."

On the success of "Pull Me Under":

James: "It was pretty surreal, especially at that point. We came out with an album that was so left [of center] — it's like, 'Wait a minute, what are the guys doing? They're releasing a progressive heavy metal album?' Everyone was, like, 'What are you going to do with this? What's going to happen?' Fortunately for us, and I have to be honest, if 'Pull Me Under' hadn't exploded like it did and made the album extremely successful, I don't know if you and I would be talking today. The reality is, before 'Pull Me Under' hit, I think they released 10,000 albums for the States, and then trickles in Canada and the international [market]. What do you do with that? If there was nothing to really grasp on to, where do you go with that? Fortunately for us, 'Pull Me Under' became something that was not only North America, where it was kicking, but all of a sudden, it made its way internationally. Europe was on it immediately, and then all of Asia, and then it just mushroomed from there. It allowed us to be able to go in with the follow-up and feel confident."

On the fact that the band doesn't always perform the track live despite it being their best-known song:

James: "We just kept thinking, 'Are we going to keep incorporating this into every leg, every tour? I think even the fans would appreciate it if we didn't play it.' I would say that that's definitely the one that we know we're kind of committed to because it was our big hit, and I can only imagine what some of these bands like THE EAGLES, AEROSMITH, Billy Joel [feel about having to play their hits]."

James: "He is, first of all, an incredible drummer. That goes without saying. I think over the years, he's at a point — especially with 'Distance Over Time' — he was fully integrated [and] fully involved with everything; the whole process, the writing. He's an incredibly talented musician. He's played stuff for us that he's written and wants to eventually release, and it's great stuff — it's really cool stuff. His whole dynamic with the band, I would have to say, it's probably been in the last few years that we have seen the full Mangini on board. I think everything up to that point was him gracefully coming into the fold — still playing phenomenal each and every night and on the albums, but I think it's been since maybe the self-titled or 'The Astonishing' that you kind of felt that whole click. Definitely, I think he shined like a diamond on the last album, and I think that's because he was fully involved. He's a great guy — he's crazy, like most drummers. He's a really funny guy [with] a crazy sense of humor. But that's good — we need the balance."

On the overall state of DREAM THEATER:

James: "I think we're extremely fortunate. We never take any of this for granted... Where we are at this point, we're in a really healthy place, and we're really taking it for all its worth."

DREAM THEATER continues to tour in support of its latest album, "Distance Over Time", which was released on February 22 via InsideOut. The record was produced by Petrucci, mixed by Ben Grosse and mastered by Tom Baker.

During the tour, the group is celebrating the 20th anniversary of "Metropolis Pt. 2: Scenes From A Memory" by performing the landmark concept album in its entirety for the first time since 2000.