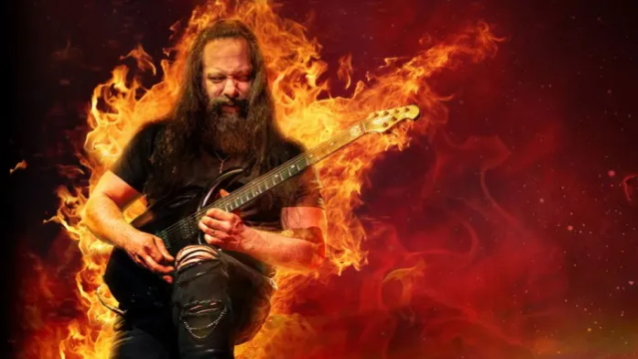 DREAM THEATER guitarist John Petrucci has announced the details of the third edition of his "Guitar Universe" camp.

Scheduled to take place August 1-5, 2020 at Hotel Irvine in in Irvine, California, next year's edition of the camp will feature Petrucci alongside Jason Richardson, Plini, Stig Mathison, Stephanie Bradley, Andy Wood and others.

"'Guitar Universe' is all about sharing," Petrucci said in a statement. "It's about people imparting knowledge, sharing thoughts and ideas about everything from technique to gear to songwriting and even to how to record.

"Our guest instructors this time are an international cross-section of the very best players from around the world, from Germany and the U.K. to Australia and Brazil and right here in the U.S. I think that's both very important and very unique, to see all these incredibly different people who are making a mark in the world of guitar. The lineup is so diverse — in technique, style, and approach — campers are going to leave with such an incredible breadth of knowledge having taken in these many types of guitar approaches."

The camp is being presented by Dreamcatcher Events, and features master classes — including some from Petrucci himself — workshops, jams, concerts, lectures, signing sessions and more.

"As a Berklee alum and someone who really enjoys teaching, I really love reconnecting with that side of being a musician by doing my own master classes at 'John Petrucci's Guitar Universe'," Petrucci said. "I could talk about technique, theory and gear for days! Sometimes I feel like my classes could go on and on but still wouldn't be long enough. That's something that I don't get to do too often anymore because of my own career with DREAM THEATER, and how busy I am writing, recording, producing and touring. I'll be bringing campers on stage during my master classes to help me demonstrate things, and I know a lot of the other instructors will be doing that as well.

"One of the things that I noticed right from the beginning was that the environment immediately created this incredible community, almost becoming more of a university setting. It's not only about the events that are happening during the day, the workshops and master classes, but what happens after hours. People get together and jam way into the night; it's just an unbelievable bonding experience.

"Campers come from all around the world; we have kids who are budding guitar players mixed with people who have been playing guitar for a very long time, all gathered together in one location and intermingling with some of their favorite players. The line gets removed and it becomes more of a collective hangout experience. Your guitar hero is in the hallway, you're eating lunch together, you're part of some intimate impromptu jam sessions. I love that! It's an opportunity to take those barriers away for a few days and just all be part of the same community, which is essentially what we all are.

"A lot of being a guitar player can be a mystery. You might read something in a magazine or look at something on YouTube or attend a concert, but it's not always graspable. If I picture myself as a 13-year-old, walking around with guys from bands I really looked up to, being able to hang out with them, ask questions, watch them play, learn how they do what they do, what an experience that would've been! It's so cool for young people to experience something like this and see that it actually can be done.

"Some of the guest instructors are pretty young themselves; they're not too far removed from the age of some of the younger campers. Kids can see that it's actually possible. Yes, it's difficult and not everybody becomes successful as a guitar player in the music industry, but it is possible. They can meet young successful people doing it as well as veterans. I would imagine that must be very inspiring, to be in that atmosphere. It all becomes a lot more real.

"One of the great things for me personally about 'John Petrucci's Guitar Universe' is that we all get to play together. For the first two nights, the guest instructors will perform individual sets and then we'll all jam together with my solo band to end each evening. Something that's kind of developed organically over the previous two camps is a solo acoustic concert on the third night. The first year was Andy McKee, last year was Al DiMeola, and this year it will be Joscho Stephan. It's a way to take a break from all of the electric guitar shred and come together as one community to watch one really gifted player. It's something I really look forward to. I'm like a little kid when we do those Wednesday night acoustic shows, just taking it all in and enjoying the experience. On the fourth and final evening, I'll perform a solo concert with my band to cap off the week's festivities.

"I'm also very excited about this camp being in California and the opportunity that that opens up for me as somebody who's lived on the East Coast my whole life. There's a certain charm about being on the West Coast — the sun, the beach, and the Californian spirit that that welcomes people from all over.

"My idea from the very first 'John Petrucci's Guitar Universe' was to make it more than just a guitar camp; I wanted to make it fun outside of just guitar playing. A real summer camp! That's something I'm going to continue to do with the next one, only we'll do it with California style. We'll be joined by some of my buddies in the wine business; we'll do some outdoor cooking. Best of all, my dear friend Sterling Ball is going to come down and BBQ for us, which obviously will be a real treat. He's not only the CEO of Ernie Ball Music Man but also a champion BBQ pit master; he put California on the map as far as being a respected state for BBQ. My relationship with him and my signature Ernie Ball Music Man guitars is going on twenty years, so having him cook for us is really cool and a pretty big deal. My dear friend and pickup-pioneering icon Larry DiMarzio will also be joining us, as well as other heavyweights in the musical equipment industry representing the various signature products I've had the honor of developing alongside, over the course of my career. What a treat this will be for everyone attending that week!

"I'm not going to lie — on a selfish level, the camp is incredibly rewarding for me. The whole thing is like a gift as a guitar player. I'm the type of guy who, whenever I'm hanging out with another guitar player, I'm asking questions — how do you do this and how do you do that? The camp is an opportunity for me to be in that environment as well. I'm a student of the guitar, I always have been and I always will be. I love that all these guys are coming from so many different countries, with all different approaches to the guitar, some of them being the new voices on the instrument. For me, that's going to be such a great experience.

"Anybody reading this who has experienced 'John Petrucci's Guitar Universe' before will probably have a smile on their face because they know what it's all about. It's an opportunity to spend a few exhilarating days completely immersed in the world of guitar, surrounded by so many amazing players and teachers in an incredible setting while embracing the spirit of sharing knowledge, jamming, and simply hanging out and having fun. It really is something special. The first two were so phenomenal, it's hard to imagine where we can take it from here but I have no doubt that this one will go down as one of the best 'John Petrucci's Guitar Universe' camps ever and I hope to see you there!"