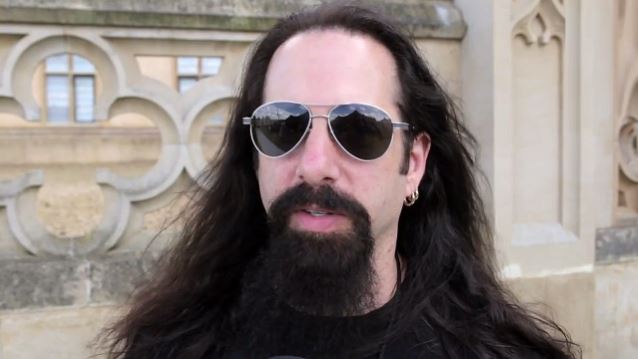 Steven Rosen of Ultimate-Guitar.сom recently conducted an interview with guitarist John Petrucci of progressive metal giants DREAM THEATER. An excerpt from the chat follows below.

Ultimate-Guitar.сom: Has anything changed since [drummer] Mike Portnoy left?

Petrucci: The things that do change along the way with different bandmembers is the interaction of yourself and other writers and how that dynamic changes the outcome of the music. For example, when we started out and Kevin [Moore, keyboards] was in the band and we were writing music together, there was a certain dynamic there. It's not like I changed my approach to guitar or my compositional approach but it's the collective outcome that changes because you're interacting with another musician.

Ultimate-Guitar.сom: Musicians coming and going affect the chemistry of the band.

Petrucci: Yeah, it was the same when Derek [Sherinian, keyboards] joined the band and, of course, my long-term interaction with Mike [Portnoy] for many, many years since the beginning definitely paved the road for all the DREAM THEATER music that came while he was in the band. Again, now that there's a new bandmember, there's gonna be a different dynamic interaction. I find what happens is the personality and the way that new person responds to what you're doing creatively and contributes in their energy and their background and their history, it just changes the dynamic a bit. That's why the music is always gonna sound different. So it's gonna be coming from a place, as far as I'm concerned, where it's always been from the beginning. From the core from when John [Myung, bass] and I were young and first met and going to Berklee. So it's gonna come from that place but the interaction musically is now different.

Ultimate-Guitar.сom: That happens every time a musician joins or leaves the band?

Petrucci: Yeah, a lot changed too when Jordan [Rudess, keyboards] joined the band almost 15 years ago. I had experience writing with him with LIQUID TENSION EXPERIMENT for two albums and then, of course, when he joined DREAM THEATER for the ["Metropolis Pt. 2:" ] "Scenes From A Memory" album. Again, he's a brilliant player and composer and writing together with him there's a different dynamic and stuff comes out differently. But I find my role kind of stays consistent. I write lyrics and that's a big passion of mine. I stepped up more in the producer role, which is something I found I really love to do as well. I guess since Mike left, that's probably something that's become, well, it definitely is something that's become more of just my single effort on my behalf as being the sole producer. But yeah, I hope that answers the question. It's a complicated answer but it's also simple.

Ultimate-Guitar.сom: But the last two records Mike Mangini played on — "A Dramatic Turn of Events" and "Dream Theater" — don't sound anything like the albums Mike Portnoy played on. Is that because of this organic interaction you're talking about? Or are you specifically writing different kinds of drum parts and grooves you know Mike Mangini can play that you wouldn't have written for Mike Portnoy?

Petrucci: It's a little bit of both. I think, generally, there's more of an organic thing. Like a good example is when we did the auditions with the drummers, the guys were all amazing. We had these jams and we would just jam straight with all these different guys and every one of those jams was awesome. You could pick stuff out of it that could have been a song you worked on. Because everybody has this great spirit of improvisation and creating on the spot and interacting and listening. But they all have just different ways of doing it and different styles. You find yourself shifting a little bit depending on how that interaction is going. So that's the organic part and, like I said before, that's gonna change with each musician you play with. Fortunately with Mike Mangini, it was a very, very natural thing and he was the one guy when we played with that we were like, "This is just it. This works. This is so natural."

Ultimate-Guitar.сom: You instantly felt that connection with Mike Mangini when he auditioned?

Petrucci: I felt like I grew up with the guy and I've been playing with him forever. Incidentally that sort of jamming and organic interaction thing is how I also developed my style as a young guitar player because I would always jam with all different bands and styles and things. In my neighborhood there were like five or six different groups of people I'd go jam with.

Read the entire interview at Ultimate-Guitar.сom.