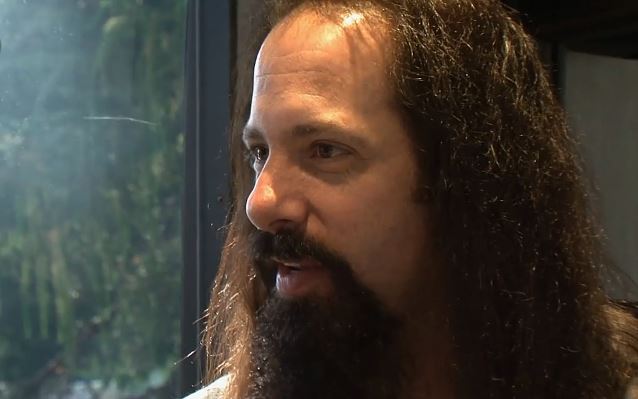 DREAM THEATER's JOHN PETRUCCI: Drummer Switch 'Was As Smooth As Any Bandmember Change Could Have Gone'

Guitarist John Petrucci of progressive metal giants DREAM THEATER was interviewed on the October 25 edition of "The Classic Metal Show", which is heard live on Saturdays from 9 p.m. to 3 a.m. EST at TheClassicMetalShow.com. You can now listen to the chat using the Spreaker widget below.

He continued: "[Current DREAM THEATER drummer] Mike Mangini really helped us to get through a major bandmember change, and in a way, that was probably as smooth as any bandmember change could have gone. The way that he came in, his personality, his skills as a drummer, his background, his history… it clicked to the point where it was, like, if we would have met Mike [Mangini] twenty years ago, we would have been playing with this guy. If I would have grown up with him, I would have been friends with him jamming. And that's rare. It's rare to do that one time around."

Petrucci added: "You know so many musicians in bands that are having trouble finding people to play with, and who click, and so the fact that this happened with Mike [Mangini], it's really just amazing to us. And since he's been in the band, we've done two albums, two world tours and, thankfully, have had a lot of success with it, and a lot of support from our fans through all of it. And, again, I wouldn't have done anything differently. It's really amazing."

Petrucci also spoke about the fact that DREAM THEATER risked losing some of its diehard audience by moving on without one of its key members. "That's always a risk, of course," he admitted. "People generally don't like change, and in this situation, Mike [Portnoy] was a major member and a major voice in the band and people really loved him, so that change is something that could potentially be dangerous for a band's future. But I think that we sort of embraced it, and it ended up paying off, was that we kind of moved forward in a very positive way, saying, 'Listen, the best way to deal with this situation is to move forward in such a way where we make, in our minds, an undeniable musical statement.' Because, at the end of the day, it's about the music."

He continued: "We've had other bandmembers before, we've had people leave, we've let people go, we've had changes, but if the music is always strong and it's true and it's genuine, then that's what it's all about. And we kept that… that was right in the forefront from the get-go — from before we went into the studio, into the studio, when it was being mixed, and everything else. And at that point, you just put your faith into the music, and thankfully, and, I guess, surprisingly, in a pleasant way, our fans showed us a level of support that you can only dream of. And that helped us through the whole thing, and we're so appreciative of that."

Petrucci added: "I'll never forget not only the album coming out and getting a great reaction, but playing the first shows — literally, the first ones with Mike [Mangini] I remember playing in Italy and such — and the response and reaction from the crowd was so welcoming, it was really kind of overwhelming. And it could have went the other way easily. But, I think, with all those things in mind, and our attitude, and our fans' acceptance, it proved to be a positive way to move on."