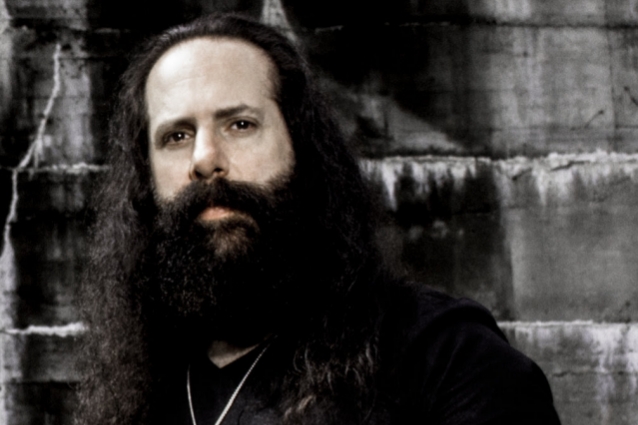 DREAM THEATER guitarist John Petrucci has shared a hilarious welcome card he received from the guest relations department of a Polish hotel.

Petrucci took a picture of the note and posted it on Instagram, writing in an accompanying message: "I can't tell whether to take this as a compliment or an insult!" He also added a winking face emoji.

DREAM THEATER is on the road in Europe as part of its "Evening With" touring cycle, featuring a celebration of the band's latest record, "Distance Over Time", and its acclaimed milestone achievement "Metropolis Part 2: Scenes From A Memory". The "Distance Over Time Tour - Celebrating 20 Years Of Scenes From A Memory" sees the band performing its full and complete three-hour set for audiences throughout Europe. The 28-date leg kicked off on January 11 in Amsterdam, The Netherlands and will conclude on February 23 in Glasgow, United Kingdom.

DREAM THEATER is continuing to tour in support of its 14th studio album, "Distance Over Time", which was released in February 2019. The disc showcases a newfound creativity for DREAM THEATER while maintaining the elements that have garnered them devoted fans around the globe. The album also marks the first for the band's new label InsideOut Music. The artwork was created by longtime cover collaborator Hugh Syme (RUSH, IRON MAIDEN, STONE SOUR). "Distance Over Time" was produced by Petrucci, mixed by Ben Grosse and mastered by Tom Baker.

I can’t tell whether to take this as a compliment or an insult! 😉 @dreamtheaterofficial