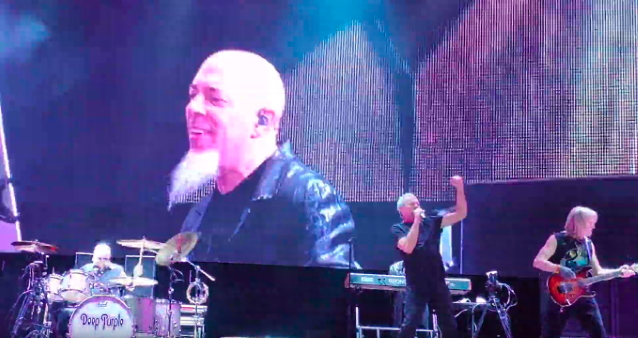 DREAM THEATER keyboardist Jordan Rudess played with DEEP PURPLE during the legendary English hard rock band's concert last night (Saturday, March 14) at the Hell & Heaven Metal Fest in Mexico City. Rudess was filling in for longtime PURPLE keyboardist Don Airey, who was unable to make the show for reasons that have not been disclosed.

Shortly after the concert, Rudess shared several photos of his time with PURPLE and included the following message: "Ok friends and fans— Here is the news. I just performed with DEEP PURPLE on stage in Mexico City at the Heaven and Hell [sic] festival. I had an awesome time! @deeppurple_official @dreamtheaterofficial the cat is officially out of the bag!!"

Rudess had previously played with DEEP PURPLE guitarist Steve Morse, both in his solo career and in DIXIE DREGS.

Jordan told Get Ready To Rock! about Morse's evolution as a musician as a member of DEEP PURPLE: "Well, it's very interesting to me. He is such a talented musician — I have always been a fan of his work, even before I joined his band. Then I watched the transition happening when he joined DEEP PURPLE. I was there when Roger Glover and the manager of DEEP PURPLE came to check him out. I remember that they came to see him a couple of nights in the clubs where we were playing at. He can do anything — I think that he can do things much further that just being a member of DEEP PURPLE. He continues doing his solo albums that are always very interesting to listen to."

Ok friends and fans— Here is the news. I just performed with Deep Purple on stage in Mexico City at the Heaven and Hell...