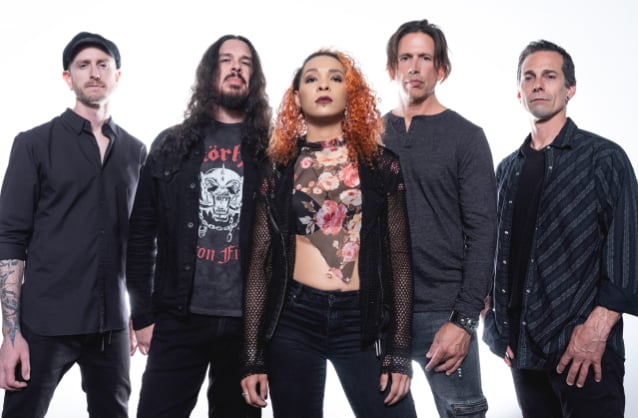 DRESS THE DEAD first announced the signing in December, along with a plan to release one new track per month for the first eight months of 2021. After the eight tracks are all released, they will become available in full album format as well.

DRESS THE DEAD stated about the track: "Knives Out! Ask yourself what's wrong with this picture?

"This was one of the first songs we wrote at the genesis of DRESS THE DEAD. Musically, it encompassed what we were after. All the anger and aggression, yet still leaning into positivity. That's what the video represents to us.

"As human beings, we have witnessed so much division and strife over the last decade. It boiled over on January 6th 2021 in Washington DC. Everything hit the wall and a large percentage of the American populous lost their fucking minds.

"With the 'Knives Out' video, we try to tell multiple stories through two separate lenses. One, while looking at our television from within your living room. The other by looking out your own window, seeing the unraveling of civility. The people's trust is almost completely broken.

"Almost all of the distrust is being fueled by mainstream and alternative media. The former caters to the corporations that control the narratives. This keeps the money and power flowing in their direction. The latter can create alternate realities not necessarily based on facts. Planting them on the internet and social media. Creating a frenzy of fear and paranoia. Both sides knowingly building up these tensions that eventually bring us to one another's throats. The divide-and-conquer game.

"We have lost our sense of reality. There's very little bullshit detecting anymore. Many run like lemmings towards the cliff on leaps of faith. What they WANT to believe. Mostly based upon hearsay. Rumors swimming in a sea of disinformation. Somehow, we need to see past the manipulation. Meanwhile the tension continues to mount."

DRESS THE DEAD was formed in 2016 and has been playing live since the end of that year — first with vocalist Peter Dolving (THE HAUNTED),and then with Kayla Dixon fronting the band since 2018.

"Losing Peter was a complete shock to us because he was into it," Craig said. "Some of the people we tried out were good but didn't have what we were looking for... just not the right fit. All of a sudden, I get a text from Kayla. She'd been checking us out for months and was already a fan of the music." A couple of days after that now legendary text message, Dixon sent Locicero a new version of the DRESS THE DEAD song "1969" with her vocals. He was floored. "It was like it was made for her," he said. "She seamlessly fit into the music. We haven't needed to readjust. What having her in the band allows me to do is to not hold back and write anything I feel like writing, knowing that she can do it and sing without any limits."

Dixon is not only an enigmatic frontwoman with a powerful presence, she's an accomplished theatrical singer and actor. Her vocal qualities help give DRESS THE DEAD a unique sound that no other band possesses. Together they all complete the musical unit that cannot fall under any one category or genre.

Dixon started working professionally in her junior year and finished high school via home study. She then decided to immerse herself in theater and was soon working professionally. During her freshman year in college, she emerged to front a death metal band. Just as she mulled moving back to the East Coast to pursue more theater work, she heard the doom band WITCH MOUNTAIN was looking for a new vocalist. She nailed the audition and moved to Portland. Having relocated to the West Coast, Dixon was recommended to Locicero through a mutual friend. She initially worried that she was so different from Dolving she might face backlash from fans who wanted a certain thing. "In my mind, I thought I was going to be trolled, and I didn't know if I was ready to face that," she said. "But surprisingly there has only been positivity from the first song."

"I want to be continually creating," Dixon added. "When I heard '1969', I thought it was great. When Craig sent me the other songs, like 'Promises & Kisses', I was really in. I wanted it to be in a band that was heavy emotionally and sonically."

Find more on Dress the dead