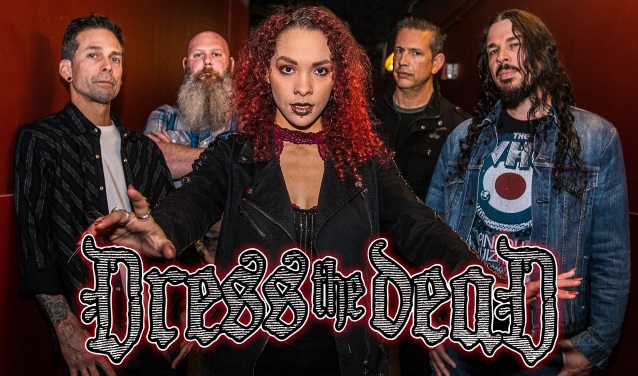 Dixon was announced as DRESS THE DEAD's new vocalist in January. She joined the band as the replacement for former THE HAUNTED frontman Peter Dolving, who left DRESS THE DEAD in March 2017. The split happened only three months after DRESS THE DEAD — whose lineup also includes Mark Hernandez on drums, James Walker on bass and Dan Delay on guitar — played its first two shows at Slim's in San Francisco, California as the support act for DEATH ANGEL.

Kayla made her live debut with DRESS THE DEAD at the January 20 benefit concert for VIO-LENCE singer Sean Killian at The Midway in San Francisco, California.

Said Locicero: "Back when my last band was coming to a close, I immediately wrote a pile of new riffs and the music came in a creative flurry. Never thinking about what I was doing, just riffing. Some of it was heavy, aggressive and thrashy while other things were more melodic and, in some cases, very beautiful.

"One of the first things that poured out was the clean intro to 'Promises And Kisses'. It sounded like water to me. Rain, oceans, rivers and storms in my head.

"When I first approached Peter Dolving about helping me form DRESS THE DEAD, 'Promises And Kisses' was in the first batch of riffs. Once Mark, James and Dan got involved, our sound quickly started developing into something pretty cool and unique. We felt the potential was farther reaching than originally anticipated.

"Peter eventually came to the Bay Area and we put our heads together with Robb Flynn [MACHINE HEAD] for the recording. Peter had the outline of something special and we were all excited. Unfortunately, when we played 'Promises And Kisses' for other people, some of them didn't connect to the emotion he was conveying. They only thought of him only as the singer from THE HAUNTED. Their minds were already made up.

"Once Peter unexpectedly left the band a couple of months later, he made it clear he wanted us to continue to play the three songs we wrote together. Easier said than done. I told him only if we could find somebody who could do them justice. One came close, but nobody made it their own until Kayla Dixon.

"'Promises And Kisses' was the first song that Kayla auditioned with back in October. She sent me a demo two days after we spoke and added elements that Peter's original version didn't have. Kayla took liberties with it and the result was amazing. She takes 'Promises And Kisses' to another level. Commanding and vulnerable at the same time. It sounds perfect coming from her female point of view.

"Kayla has the rare ability to do what the greatest singers can. She not only writes her own lyrics and melodies, but expounds and re-imagine others' songs to make them her own.

"Once we got Kayla into the studio with Robb, the real magic happened. Robb suggested she sit down and think about what these songs meant to her. Most importantly, he captured an amazing performance. Kayla was pretty much limitless in the studio. As a result, everything she recorded has a tangible connection. What we've been writing since then is equally as strong.

"We feel we must give Peter the deserved credit for his artistry. The stuff that made me want to be in a band with him in the first place. He set the bar so high that we couldn’t find the right person to replace him. Not until Kayla Dixon walked through our door and rocked us to the core.

"Nobody saw it coming.

"Dolving left us some almost impossible shoes to fill until Kayla came in and stomped down her own footprint."

Dixon said that she first learned about DRESS THE DEAD after "a mutual friend reached out" to her. "One of my first thoughts was, 'I don't know if I'm ready or even at an appropriate talent level to be replacing someone like Peter Dolving for these guys,'" she said. "I'd battled with the idea in my head for several months before finally reaching out. I had listened to and loved '1969' but what really hit me hard was when I heard the other songs that are still unreleased that they sent me. I had no idea how musically diverse this band would turn out to be!"