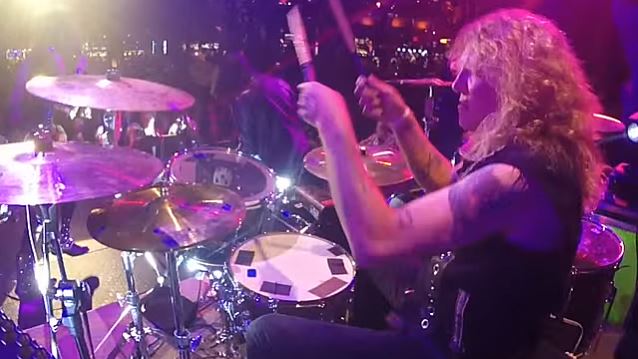 Drum-cam footage of former GUNS N' ROSES drummer Steven Adler performing with his band ADLER on August 28 at Wolf Den at Mohegan Sun in Uncasville, Connecticut can be seen below.

Asked about the persistent rumors of a reunion of the GUNS N' ROSES' classic lineup, Adler recently said: "I have no idea. Put it this way: I've known [former GUNS guitarist] Slash for 38 years, we've known each other. He knows damn well if he told me something that I would climb the highest mountain and I would be screaming it out for joy. So, if anything happens, I will be the last to know about it."

He continued: "I'm just glad that I had an opportunity in my life to achieve my dreams, to play with such great people and such talented people and make such a great record with those people. And just being a part of it, I'm happy. I could go to heaven right now and be happy."

Slash recently revealed that he and GUNS lead singer Axl Rose had repaired their estranged relationship after nearly 20 years, immediately leading to a storm of speculation about a possible reunion of the classic GUNS lineup.

Adler was fired from GUNS N' ROSES in 1990 for his rampant drug use and replaced by Matt Sorum. Fans have wondered whether both drummers would be brought back for a reunion tour.

Sorum told The Pulse Of Radio a while back that if the band reunites, he and Adler should both be there. "If it's me on drums or Steven or whatever, if it happened, it'd be great, you know," he said. "I would actually say to them, 'Hey, bring both of us back,' you know. Let me play the other stuff. We'll have two drum kits. I don't care. If 'Appetite For Destruction' [the band's debut] sounds better with Steven playing it, have both guys up there. They can afford it."

Adler says he remains in contact with Slash, and has also communicated with Axl Rose in the past few years.

He expressed frustration that the original GUNS has not reunited, saying, "I don't get it. We just play music. We're living our dream. When we're together, we play it really great. Let's just do it. What's the problem?"