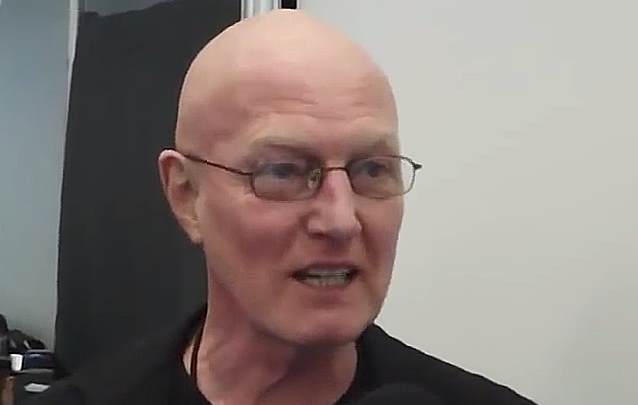 During a recent interview with Music Radar, former AC/DC drummer Chris Slade spoke about his departure from the band before the recording sessions for 1995's "Ballbreaker".

"I'd been doing demos [for what was to become 'Ballbreaker'] with the guys in London for two months," Slade explained. "Mal [AC/DC co-founder and rhythm guitarist Malcolm Young] called me and said it was nothing to do with me and was nothing I was doing or not doing but they wanted to give [longtime AC/DC drummer] Phil [Rudd] a try. I said, 'That's me out then, I'm gone.' Mal said, 'No, no, no we want to keep you on, we don't even know if Phil can play,' and told him that was his problem now. If it ain't broke, don't fix it. I resigned the next day. They wanted to keep me on for months and months and that didn't feel right. It was probably my stupid pride."

He continued: "If that was my son, I would now say, 'No, just sit there, they'll come back to you.' To be honest, I think they would have. [laughs] But they're very proud themselves and they wouldn't come back now.

"We still get on and it was an honor and a privilege to play with those guys.

"People always ask me what I did when things went wrong on stage with AC/DC. Nothing ever went wrong. I might drop a drum stick, maybe, but that was about the only thing. They were like clockwork, like a machine. Just fantastic. What a wonderful experience."

Slade recently commented on the news that Malcolm Young was stepping away from AC/DC due to ill health. Slade told U.K.'s Rhythm magazine, "It's terrible to hear about Malcolm. I knew he was ill. He's been ill for a long time, but I think it's come to a head by the sounds of things."

Slade praised his former bandmate, adding, "I've spoken to other guitarists about this — he must be the greatest rhythm guitarist ever born. Even Angus [Young] says he's a better guitarist. He makes the drummer's job so easy; he's a metronome."