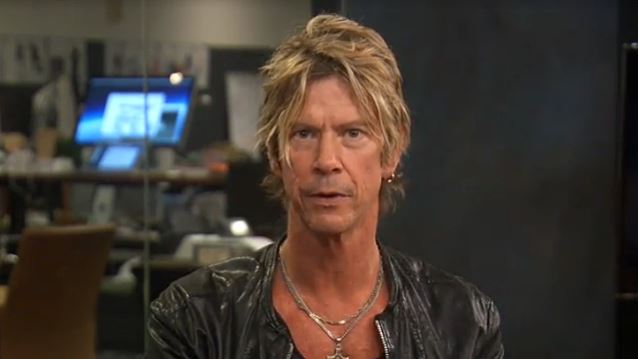 DUFF MCKAGAN: How I Ended Up Playing 'Gimp' At FAITH NO MORE's Los Angeles Show

The FAITH NO MORE vocalist joked from the stage that McKagan was the Gimp on April 23 at at the Wiltern, and Duff tweeted a photo of himself dressed as the Gimp.

The Gimp character has been accompanying FAITH NO MORE at all of their live shows in 2015.

During a live interview on HuffPost Live, which aired yesterday (Monday, May 11),McKagan stated about how he ended up playing the Gimp at the Wilter show: "Their 'Gimp' guy got stuck in traffic or something — something like that — and Patton asked if I'd be the 'Gimp.' And I'd just gotten to the gig, me and another friend. I'm wearing all black, and everybody else was wearing white. 'Cause they [FAITH NO MORE] play in white, and everybody backstage, their crew, they all have white on. The guy I came with, Jerry Cantrell [ALICE IN CHAINS], he wore white, because he had gone to the show the night before. I picked him up, [and I said], 'What are you doing wearing all white?' He's, like, 'FAITH NO MORE white, dude.' [I was, like], 'Oh, yeah, I blew it.' But being the only guy dressed in black, I was the instant 'Gimp.'"

FAITH NO MORE's two best-selling albums, 1989's "The Real Thing" and 1992's "Angel Dust", are being reissued in new editions featuring plenty of bonus rarities. The reissues will be available as either double-CD or heavyweight double-vinyl sets with the CDs available on June 9, one month after the band releases its first set of new music in 18 years, "Sol Invictus", on May 19.

Neither disc will contain any previously unreleased tracks, but both will collect hard-to-find rarities in the form of live cuts, remixes and other B-sides and bonus tracks.