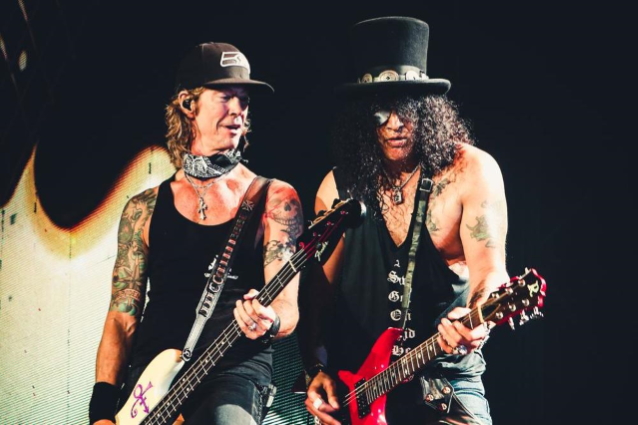 DUFF MCKAGAN Recalls Meeting SLASH For The First Time: 'It Was Kind Of A Culture Shock'

GUNS 'N' ROSES' Duff McKagan and PEARL JAM's Stone Gossard were interviewed for the latest episode of Spotify's "Rock This With Allison Hagendorf". They cover everything from being at the center of Seattle's burgeoning punk and grunge scenes in the 1980s to this week's release of "The Living: 1982", a previously unreleased LP from Duff's teenage punk band THE LIVING. Allison follows their conversation by playing tracks from some of Duff and Stone's earlier bands, grunge pioneers 10 MINUTE WARNING, GREEN RIVER and MOTHER LOVE BONE, as well as their grunge peers like MUDHONEY and ALICE IN CHAINS. Finally, they wrap things up with tracks from the bands that rocketed them to stardom, and TEMPLE OF THE DOG's iconic "Hunger Strike".

Speaking about the first time he met GUNS N' ROSES guitarist Slash, Duff said: "I met him and Steven Adler [former GUNS N' ROSES drummer] at Canter's [family-owned 24-hour Jewish deli that's been in business since 1931]. It's a restaurant [in L.A.]. I had never been to Canter's. [Canter's third-generation owner] Marc Canter was Slash's boyhood friend. These guys grew up with each other in L.A. It was so foreign to me. I had come down [from Seattle] and played punk rock gigs [in L.A.], but I didn't know anybody in Hollywood, and here I was. I walked in. His name was Slash in the ad. We talked on the payphone, and I thought he'd be some, like, punker guy like me. 'Cause it was '84. By '84, and GREEN RIVER is a good testament to this, by '84, people were looking, like, 'Whatever's gonna be next is gonna be on our shoulders. Punk's done.' The hardcore had come in and kind of ruined a lot of punk scenes. It was these suburban jock guys who shaved their heads and started beating up people and doing 'sieg heils.' It was, like, 'This is not punk, guys.' So whatever was next, it was gonna be up to."

He continued: "So this guy's name was Slash. The influences he liked were FEAR, AEROSMITH, Alice Cooper… I'm, like, okay, but this guy's going kind of where I'm going. I had blue hair, short blue hair. I walked into Canter's. And they told me what booth they were gonna be at. So I found the booth, and it's these two long-haired guys, and I'm, like, 'Woah.' It was kind of a culture shock, and I think I was a little bit of a culture shock to them. But we sat down and started talking, and we talked about music. And that's the thing that — it's a universal thing. We went back to Slash's house, his mom's basement, and he started playing acoustic guitar. [Prior to that] I had played with these guys. Stone mentioned Paul Solger — he was the guitar player [at the time]. He could play leads and he was smooth and slick, and I thought he was the best guy on the West Coast. And I got in this basement with Slash, and I'm, like, 'Oh, wow.'"

Earlier this month, GUNS N' ROSES postponed its European tour for a second time due to the ongoing COVID-19 pandemic.

In 2019, "Not In This Lifetime" became the No. 3 highest-grossing tour in the history of Billboard Boxscore.