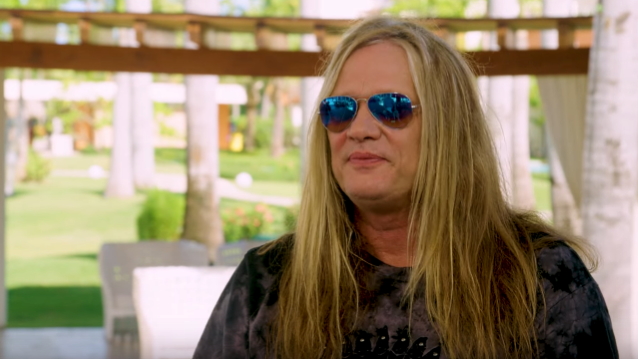 SEBASTIAN BACH Says His Wine Appreciation Has 'Gone Down' In Lockdown

In the latest episode of AXS TV's "Rock & Tell", former SKID ROW singer Sebastian Bach shows off some of his favorite rock and roll memorabilia, including a signed copy of Roger Daltrey's (THE WHO) memoir, "Thanks A Lot Mr. Kibblewhite: My Story".

After recounting the night he and Daltrey drank "a lot of wine" while at a dinner together, Sebastian said: "You wanna know something weird? I've tried to keep up with my wine appreciation in lockdown, and it's gone down. I don't know what it is, but sometimes now, I'll have some wine at nighttime, and then I'll wake up at three or four in the morning and go, 'Ah, this sucks.' It's kind of a downer. It's different having wine in a lockdown under a pandemic than after a gig on a tour bus. [Laughs] That's the quote of the century right there."

Bach previously spoke about his love of fine wine in a 2020 interview with Esquire. He stated at the time: "I've loved red wine my whole life until March, when this [pandemic] shit happened. When this shit happened? I lost my — it's just a different buzz! It's a different feeling, no matter how hard I try, I can't really drink red wine anymore."

Two months ago, Bach said that he had finished demoing 14 new tracks for his next studio album.

In January, Sebastian told The Aquarian Weekly that he was working on a new album but he declined to name the record company that will be putting it out. "Yes, I have a new American label and I have been working somewhat on the album during this damned quarantine," he said. "But there is only so much I can do in my house. I have been sending files back and forth [to my bandmates], but it is not as exciting as being together in the same room. Maybe Taylor Swift lives with her whole band. I don’t know how that works."