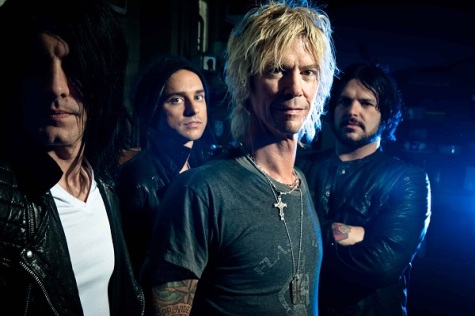 In 1999 the musician formed LOADED, which saw him move front and center on guitar and lead vocals. On Tuesday, April 19 LOADED released its new album, "The Taking", and in an interview with Sterling Whitaker of Examiner.com to promote the record, McKagan also spoke of his disdain for "Celebrity Rehab", the popular reality TV show that portrays celebrities undergoing treatment for various forms of addiction.

McKagan's former GUNS N' ROSES bandmate Steven Adler appeared on the "Celebrity Rehab", and when asked if he found that exploitative, Duff answered, "Yes. Absolutely. And the same with [ALICE IN CHAINS bassist] Mike Starr. I cringe, I think it's the worst thing for so-called sobriety. 'Hold on, we're having a breakthrough . . . Wait, we've gotta do makeup.' You know?

"There's a reason it's anonymous, because if you fail, you're failing on camera," he noted. "You're failing after you've been on this rehab show."

McKagan himself has gotten sober, and said that anonymity is crucial to success.

"Somebody didn't just come up with it because it sounds good," he stated. "Anonymous, you don't have to succeed all the time. You can fail, and you can still come back and nobody's gonna judge you. I wouldn't have wanted to try and get sober in a public forum. I don't think it's right so . . . whatever. That's how I feel. It's not cool."

"The Taking" is available now from Armoury Records and Eagle Rock Entertainment.