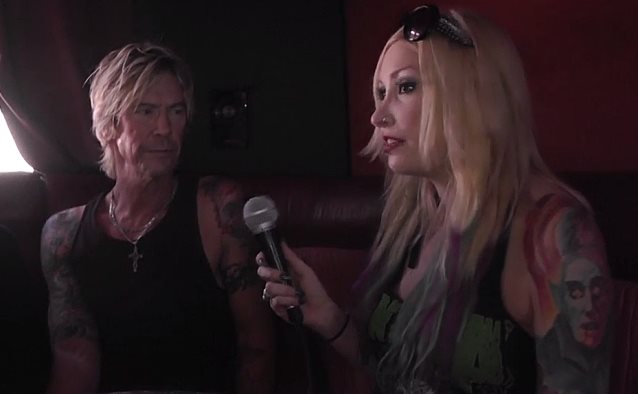 Hayley Leggs of TotalRock Radio conducted an interview with Duff McKagan (WALKING PAPERS, LOADED, GUNS N' ROSES, VELVET REVOLVER) at this year's Hellfest, which was held June 20-22 in Clisson, France. You can now watch the chat below. A couple of excerpts follow (transcribed by BLABBERMOUTH.NET).

On whether he would consider fronting VELVET REVOLVER as the replacement for Scott Weiland, who was dismissed from the group in 2008:

Duff: "I would consider it, but I think it's the type of band that it's best if we have a lead singer. I like rocking with Slash [VELVET REVOLVER/ex-GUNS N' ROSES guitarist]. When we play, I like rocking with the guitar players and the drummer and being able to fly around. When I sing with LOADED, I can't move at all. I'm playing guitar and I'm singing. I figured out I'm a fucking dum-dum. I wrote too many lyrics in the songs. There's just too many goddamn lyrics, and you can't ever move away from the mic — rarely — except when I jump into the crowd, and then that's, and then the band's playing and I get back up and I have to sing more. "

On the status of VELVET REVOLVER's singer search:

Duff: "We tried out a guy, actually, just a couple of weeks ago. A really good guy, good singer, but it just wasn't the right fit. I get e-mails all the time: 'Hey, check this guy out.' And we have internal e-mails going around. Slash's got a new record coming out, so he's gonna tour that thing like he does; that guy just goes out."

On his next book:

Duff: "I'm writing a new book; I've got a new book deal. So I've been back here writing a lot. I had a column for the Seattle Weekly for five years, and there was one column that was called 'How To Be A Man,' and it was kind of tongue in cheek; it was really tongue in cheek. And I got a book deal from that column. It's a how-to guide of things I've learned about life — being a dad, being a husband and being in a rock band. And it's, like, a city guide in it, but a very tongue-in-cheek city guide; like, how I see cities. It's got all kinds of stuff. And other stories. And hopefully it's gonna be a funny book."

On the previously announced documentary based on his critically acclaimed memoir, "It's So Easy (And Other Lies)":

Duff: "I'm a book nerd, and I've seen authors that I love, I've gone and seen them speak or read from a book. And some authors that I've loved their internal voice, their narrative, and then you see them speak, and it's, like, 'Ohhh…. Shit.' So they wanted me to do aa book-reading tour, and [I thought that was] boring and a little… So they came up with this thing with music behind it and video and me reading… but kind of more dramatic, reading parts from a ook, and there's music behind it… live music, but down, like pedal steel and stuff. Kind of like WALKING PAPERS music. And I did some shows — I did one in London, I did one at the Rock And Roll Hall Of Fame, the night before, and I did one in L.A. and Seattle, at a big theater. And this director guy said, 'I'd love to film that show and do kind of a documentary,' not just about me, but about rising above — people who have risen above, overcoming shit. So we have some rally amazing people. Randy Blythe's [LAMB OF GOD] gonna be in it, and this guy Steve Gleason. He used to play for the NFL and he has ALS, so he only talks with is eyes now But you wouldn't know it if you followed him on Facebook or Twitter, 'cause he's always doing something for somebody else. And he's got a wife and a little boy. He's recorded his voice before it went for his little boy to grow up to. So we've got some really fascinating, cool people in the movie. Hopefully you'll come out of it going, 'Fuck, yes, I can do anything.'"