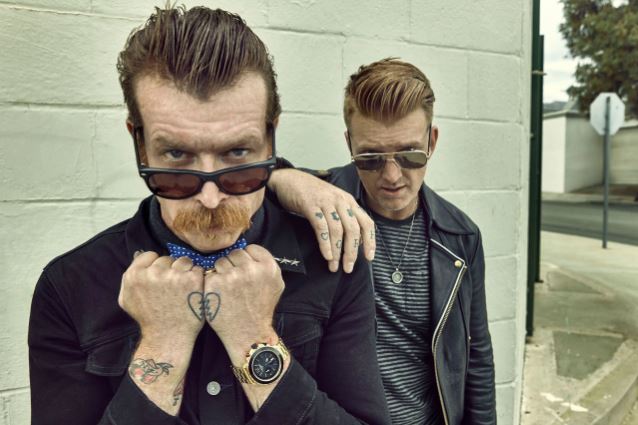 According to the BBC, a documentary about the EAGLES OF DEATH METAL — who were thrust into the headlines on November 13 when a mass shooting at the band's Paris concert left nearly 100 people dead — has been pulled from the International Documentary Film Festival in Amsterdam.

Screenings have been cancelled of "The Redemption Of The Devil", which follows EAGLES OF DEATH METAL frontman Jesse Hughes in the build-up to the release of their new album.

The BBC reports that the film was pulled because the timing felt inappropriate.

Produced by VICE, "The Redemption Of The Devil" follows Jesse as he becomes ordained as a Catholic minister, his relationship with former adult film star Tuesday Cross becomes progressively intense, and his passion for conservative politics leads him to seriously consider re-entering the political arena. At times, Jesse's life seems endlessly explosive as he preaches to the right-wing with a gun in hand, while the ongoing battle for custody of his only child plays out in the wings.

EAGLES OF DEATH METAL yesterday announced that all of their future shows are on hold and issued their first official statement following the events of last Friday night in Paris, France, when more than 129 people were killed in seven coordinated terrorist attacks.

EAGLES OF DEATH METAL was founded in 1998 by QUEENS OF THE STONE AGE mainman Josh Homme and his longtime friend Jesse Hughes. Homme appears on all the band's albums but only plays live with them occasionally. He was not in Paris at the time of the attacks.