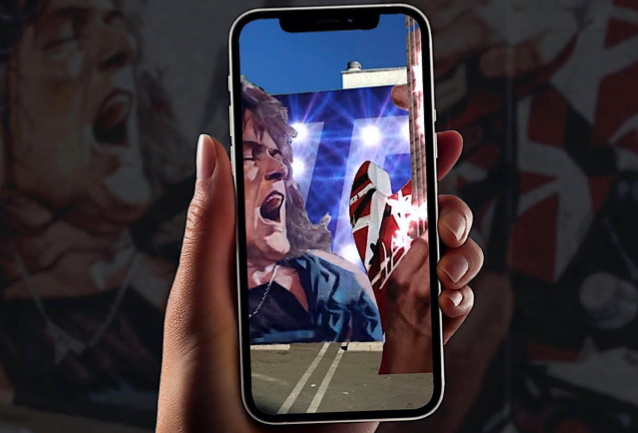 The AR Firm's motto "Beyond Unreal" became firmly based in reality when they created an app that brought California artist Robert Varga's mural to life. Van Halen's image seamlessly continues to sing and play and can be seen in the video below. The mural itself measures a massive 17 feet by 105 feet. The mural was entirely painted by hand, without the aid of templates, stencils, or projections, and can be found at the iconic Guitar Center location at 7425 Sunset Blvd. Hollywood, CA 90046.

The AR Firm CEO Roman Gora explained: "Eddie Van Halen was an icon that fans worship to this day. We knew we had a chance to create something really special. This way Eddie will shred forever."

"Augmented reality technology is the next wave of experiential entertainment. We make things people dream about really happen," The AR Firm COO Drew Iwankiw explained. "The waves of Van Halen fans holding up their phones to the mural and tearing up watching Eddie play after his death. I have the best job in the world."

In January 2021, Wolfgang Van Halen defended Vargas against criticism from VAN HALEN fans over the mural of his father. Vargas donated his time and talent to design and create the mural, which covers the entirety of Guitar Center's outer wall at its rear entrance.

While majority of the feedback from VAN HALEN fans had been extremely positive, a couple of fans have opined that the mural of Eddie playing his iconic "Frankenstrat" guitar is not a realistic depiction of the influential axeman.

This is not the first mural that had been created in honor of the iconic musician. Less than a month after Eddie's death, airbrush artist Paul Archer painted an Eddie Van Halen mural on the back wall of Archer Airbrushing shop in Victoria, British Columbia, Canada.

Eddie passed away in October 2020 at the age of 65. His death was announced by his son.