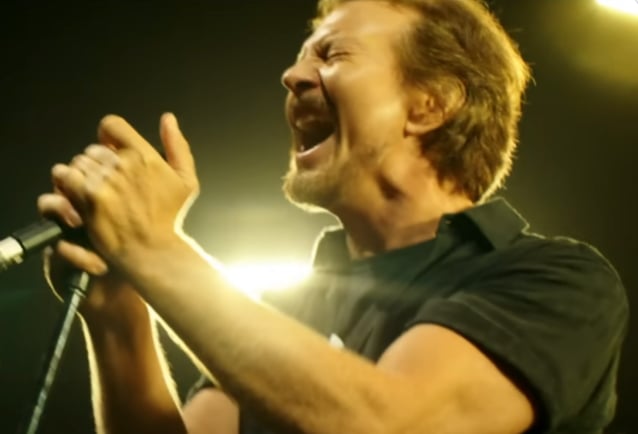 The cancelation comes one day after PEARL JAM scrapped its show in Vienna for the same reason.

"We were hopeful that Ed would make a recovery in time to perform tomorrow," PEARL JAM said in a statement via Instagram on Thursday (July 21). "He has seen a doctor in Prague and is continuing the treatments for his vocal cords, but unfortunately, there is still no voice available. The effects on his throat from the last outdoor show are still just too brutal.

"We again send our sincere apologies to all of those who have worked intensely to put on the show. Even bigger apologies to those that were expecting to attend. We've always had memorable shows here and are with you in our extreme disappointment.

"You can be guaranteed we are doing everything we can to help fix the situation. Again, so sorry.

"Tickets will be refunded at the point of purchase.

"Thank you immensely for your understanding."

The final two shows of PEARL JAM's European tour are scheduled to take place on July 24-25 at the Ziggo Dome in Amsterdam, Netherlands.

CNN reported earlier in the week that extreme heat had engulfed parts of western Europe, with wildfires raging in France, where PEARL JAM performed on Sunday as part of the Lollapalooza festival.

The band canceled a concert in Vienna on Wednesday, stating: "Due to the extreme circumstances at the last outdoor site, outside of Paris (heat, dust, and smoke from the fires) our singer Ed Vedder's throat was left damaged. He has seen doctors and had treatment but as of yet, his vocal cords have not recovered. This is brutal news and horrible timing … for everyone involved."

PEARL JAM returned to the stage last year and performed music from its latest album, "Gigaton", for the first time during a string of shows. Upon arrival, "Gigaton" bowed at No. 1 on the Billboard Top Rock Albums Chart and the Top 10 of the Billboard Top 200.