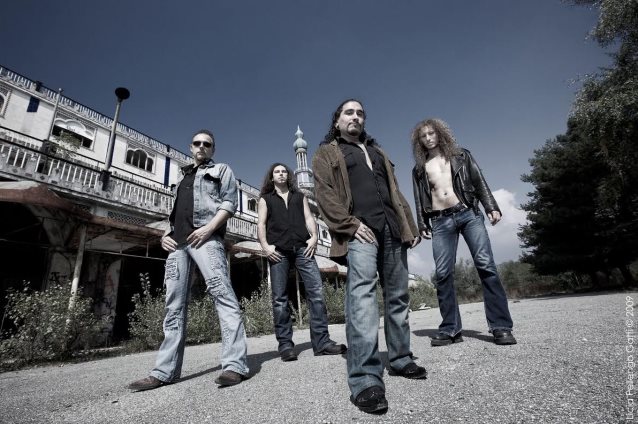 Frontiers Music Srl has announced the signing of EDGE OF FOREVER to a multi-album deal.

Originally formed in 2002, EDGE OF FOREVER released its first album, "Feeding The Fire", in 2004 which was produced by the late Marcel Jacob (ex-YNGWIE MALMSTEEN, TALISMAN). Just a few months later, the band was already working on a new album with producer Bobby Barth (AXE, BLACKFOOT) in New Orleans. The collaboration led to "Let The Demon Rock 'N' Roll", which came out about one year after the debut album. In 2005, the band saw a change of personnel, leaving only Alessandro Del Vecchio and Francesco Jovino from the original lineup. Alessandro then took on the lead vocal spot and guitarist Walter Caliaro and bassist Nik Mazzucconi (Ian Paice, Carmine Appice) joined the band.

In 2010, with the new lineup operating like a well-oiled machine, EDGE OF FOREVER released its third record titled "Another Paradise". The album was once again very well received and Alessandro Del Vecchio's reputation as producer started to grow steadily. While Francesco was stepping into the metal world with U.D.O. and a short tenure with ACCEPT (now he plays drums with PRIMAL FEAR),Alessandro Del Vecchio started to tour with artists like Ian Paice, Glenn Hughes, Bernie Marsden, and Carmine Appice and also continuing to work in the studio. In 2011, Alessandro signed on with Frontiers Music Srl to produce and be part of the comeback of the legendary hard rock act HARDLINE. Again with his pal Francesco Jovino on drums, HARDLINE released "Danger Zone" in 2012 while the video for the single from the album, "Fever Dreams", reached almost one million views on YouTube.

Now it's time for Alessandro and his guys to step out on their own and show the world what they're capable of! "I'm very honored to have my own band EDGE OF FOREVER signed to the big Frontiers family," says Alessandro Del Vecchio. "It's been a few years now that I've worked with Serafino and for some time we have been talking about a record with me on vocals, which couldn't be with anyone but with my guys. Francesco, Nik and Walter have been with me already on a few albums I released through Frontiers, but this time is gonna be different. It's our baby and our primal need of creation.

"We are entering the studio this summer and I promise we will deliver our best songs and I will top my productions with a bombastic and epic sound. In addition to the new album, we decided to allow Frontiers to re-release our previous albums — which I'm gonna remaster with bonus tracks — for all digital platforms. I guess it's time for people to listen to the outtakes of our previous albums with our friends Jeff Scott Soto and Bobby Barth. This made the deal even more attractive for us.

"Now it's our turn to say something and give Frontiers our best album so far! I feel and we feel more confident than ever in what we can do. Years of working in the Champions League of rock 'n' roll forged us as better musicians. I honestly can't wait.

"After five years of amazing music with Frontiers, I'm excited to do something again with the band that started it all for me. Who's luckier than me?"

EDGE OF FOREVER is: