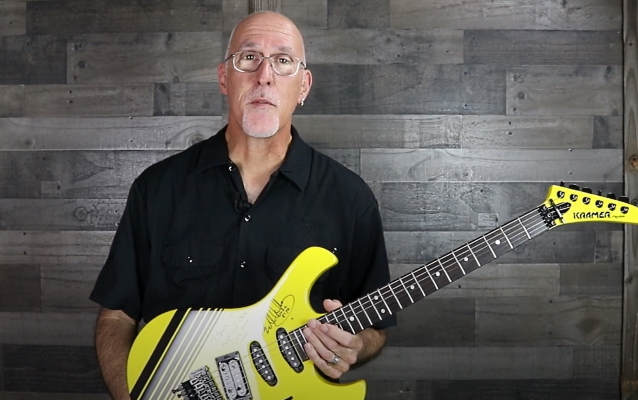 Five Star Guitars, a premier guitar retailer in Oregon, today announced that it will list two incredibly rare Eddie Van Halen Kramer guitars on consignment. The first is a true piece of rock and roll history, a 1988 Paul Dean Signature model that comes directly from the collection of Tom Weber, the guitarist's tech from 2007 to 2020, gifted to him and signed by Edward Van Halen. Additionally, a 1988 Kramer Baretta American Series guitar with custom "Monsters Of Rock" tour graphics signed by the entire band is being sold for the first time from the Taft Collection.

A gift to Weber from Van Halen in 1988, the Paul Dean Signature Yellow Kramer guitar has remained the prized possession in his collection for more than 30 years. While working as a sound technician in Tennessee in the 1980s, Weber learned that Van Halen had recently damaged an acoustic guitar on tour — rumored to be a gift from HEART's Nancy Wilson. He arranged to meet the guitarist backstage after a gig and presented him with an Ovation steel stringed acoustic from his personal collection as a replacement, a gesture of goodwill that stuck with Van Halen. Two weeks later, Weber received the surprise of a lifetime: the Kramer on his doorstep, signed by Van Halen with a heartfelt note of thanks.

"The Kramer represents the very beginning of my relationship with Ed," said Weber. I was lucky enough to develop a friendship with him, eventually winning my dream job — becoming his guitar tech from 2007 right up until 2020. He was a true original, and so was this gift he gave me. I've treasured this guitar for many years and now it is time for it to become the prized possession of another collector."

The guitar will also include unique memorabilia; a 1988 guitar pick gifted from Van Halen; a laminated Sound Engineer pass, and a 1988 tour pass from the show where the two men first met; a hand-written note from Van Halen with his 1988 contact information; and a signed, multipage letter from Weber that reveals the entire history of the guitar and his tenure with the band.

Also up for sale from the Taft Collection, a private collector in the Pacific Northwest, is the 1988 Kramer Baretta. The instrument is one of 25 signed guitars given away by Van Halen during the 1988 "Monsters Of Rock" tour that saw the band on the road with SCORPIONS, METALLICA, DOKKEN and KINGDOM COME. Almost half of the existing guitars are in the permanent collection of the Hard Rock Café, while the rest are part of private collections. The Baretta boasts custom graphics from the tour, signatures from all four band members, and its original Kramer hard shell case.

"We're proud to be able to find these amazing pieces new homes," said Geoff Metts, co-owner, Five Star Guitars. "Tom's guitar is a true piece of rock and roll history that is a must for any serious collector, and the Baretta is a highly sought-after piece as well."

For more information about Five Star Guitars and the current Van Halen gear for sale, go to this location.